Premature Birth in the News 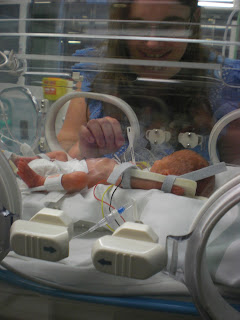 Yesterday was one of those days when as a parent of a premature baby you catch your breath. It was everywhere. Myself and many other parents were called upon by the media to give our "soundbites" short little insights into our world. A world of tiny babies, of highly medicalised beginnings, and for many parents, uncertainty and ongoing problems.

The reason for the buzz about preterm birth was the release of new date from the EPICure project. You can learn more about the project on the NHS website here. EPICure looked at data collected from maternity and neonatal units in 1995 and then 2006. I have a few issues with the EPICure methodology and just how much it is relied upon, but that's a post for another day.

EPICure looks specifically at babies born between 22 weeks of pregnancy and 26 weeks. The article I have linked to gives more specific information about the data but in essence the study found that survival rates have increased over the period of time from 1995 to 2006
The main reason for the increase in survival rates has been reported to be the delivery of steroids to the mother to improve lung development. I do think there is greater awareness of pregnancy problems, and as mothers to be become more aware of developments in this area, they are a driving force behind good care provision and proactive management.

Sadly the range of problems that can beset a premature baby remain unchanged, and the rates of complications like retinopathy of prematurity are going up rather than down, although it could be argued that this is due to better screening protocols than actual real increase.

What is undeniable is that preterm birth rates are not going down, and that the likelihood of these babies going on to have long term health problems remains a constant risk.

My concern, as a parent, is what is being done to prevent premature birth? We need more research, much more money spent on real solutions to pre term birth, better education of mothers to be about issues like infection, pre eclampsia, and rupture of the membranes. We need to get better at talking about risk and management of that risk.

Women are intelligent, resourceful, resilient, we can cope with the real facts. So many times I have heard "oh I don't want to hear about what can go wrong, I don't want to be frightened". And thought I can understand, sure knowledge gives us power to make decisions and fight for good care.

We deserve it, and sure as hell our babies do too.