Break Barriers Open Doors - Where do we start?

Today is International Day of Persons with Disabilities. The theme this year is Break Barriers Open Doors.  This post was meant to be "how you talk to children about disability" please read on!

I started being interested in disability issues from the age of 7. I attended a special school for a year and met children from all sorts of backgrounds with various conditions. I was restreamed after a year. My school then introduced a scheme where children from the local special school would visit once a year. I will never forget my year 5 teacher saying "make sure you put all your valuables away, they are not like other children". I challenged her on it, which for me back then was very rare. She was suitably chastised, and when the children arrived I think she had her own eyes opened that actually there was no difference between "them" and "us". Thankfully now integration is widely practiced, however what's important is that there is true integration which means making sure our attitudes are inclusive ones and we are not just practicing tokenism.

In 1981 when I was 9, we had the International Year of the Disabled, which shocked me as much as inspired me. To be honest, a lot of the rhetoric around last year's Paralympic Games was very similar to that being used at this time.  People's attitudes were really quite frightening. It was great to see stories of triumph etc, but the role of the person with a disability in society isn't necessarily to inspire, it's the same as the rest of us, to have choice, to have freedom, and the ability to live the life of their choosing. And disability still vastly restricts a person's life choices. That is wrong and we need to change it.

I did volunteer work through university and beyond in Citizen Advocacy, assisting people with disabilities to speak up for themselves and have their choices known. I then worked as a disability support worker for 5 years and reprised this role when moving to the UK. I hate the term carer, or even support worker. Our role when we work with people with disabilities is a partner, a facilitator, an empowerer.

I've grown up seeing people as people. For me it isn't rhetoric I just don't really notice it. 1 billion people in the world are estimated to have a disability. However, when I trained in disability support work the philosophy I learnt is that we all have disabilities, things that make us less than perfect. And we are all just an illness or accident away from severe disability. 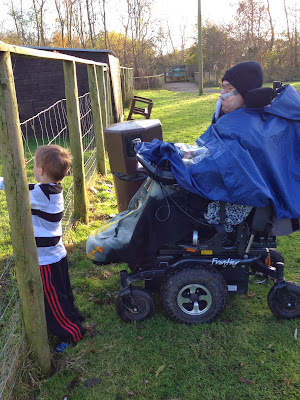 Teaching kids about disability isn't important. Teaching them about people is what is important. My best friend has a condition called Duchenne Muscular Dystrophy. We became friends over 2 years ago, and Joseph met Daniel a year ago.  If you ask Joseph about Daniel he would tell you that Daniel has dogs and a cat, loves fish, and computers and is fairly rubbish at Angry Birds. He might tell you Daniel needs help with his breathing, but he probably wouldn't. And I would be very surprised if he mentioned Daniel's chair.

I answer Joseph's questions honestly. He did ask once if Daniel would die and I explained that we all die one day, and that Daniel may die sooner than he should. I used this as an opportunity to explain the importance of handwashing and keeping Daniel safe from germs, and also the importance of making the most of everyday and to enjoy his company.  I giggle if Joseph is playing computer games with Daniel and says "your arm is in the way move it!" rather than get embarrassed.  Joseph doesn't treat Daniel any differently than he does any of my other friends. He treats him with respect, and with kindness.

Kids pick up on your own attitude. If you can see past the disability to the person's personality, to what makes them them, then your child will too. Questions do crop up and its ok not to have all the answers. You can endeavour to find them out together. 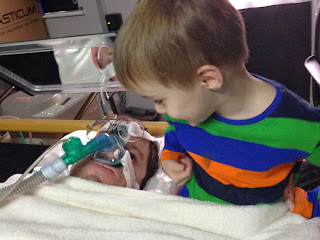 Joseph hasn't even noticed that his dad has a disability, arthrogryposis multiplex congentia. He's never really noticed that he walks with an unusual gait, and doesn't bat an eyelid to the fact this hands are bent a bit, and there are things he can't do. Joseph is growing up understanding variance and seeing the person as a person.

Now more than ever we need to develop more compassion, more understanding. It saddens me that whilst there has been change since I was Joseph's age it is far too slow.

To break barriers and open doors we first need to start by examining our own hearts, our own attitudes and help our children grow in love and compassion.

This is where we Break Barriers and Open Doors. We start with the hearts and minds of our children. We teach them about people. We answer questions open and honestly but we don't make a big deal of it. We concentrate on getting to know people, their hearts and their minds and their personalities.

That's how we do it.