Our lovely afternoon at The Clarence, Silver Street People's Republic of Bury.

So yesterday Joseph and I decided to go and see if we could find Father Christmas. I will blog more about our day later. We decided to go and find cake. I suggested we try The Clarence . I had heard they do coffee and cake so I thought we should give it a go. I did intend The Clarence to be a much awaited date venue with the husband but Joseph pipped him at the post. Well Joseph was initially entranced by the busy Clarence and even at 3 in the afternoon there were only two tables left. We took a window seat. 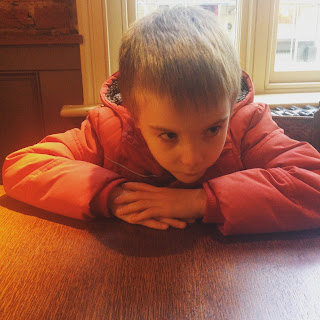 "I will absolutely not have coffee and cake in a pub" said Joseph. We had already ordered. However coffee and cake for too is the princely sum of £7. No not each. £7 for two. £3.50. No one could accuse The Clarence of not being good value for money.

Things went wrong initially when the waitress said "we don't do chocolate cake, only chocolate and orange" They had Manchester Tart cake so I ordered that and chocolate and orange, hoping that one of those would suit sir. "I don't want American cake". Said my darling companion. I looked at him confused. "The Americans are always adding rubbish to chocolate cake". Okaaaaay. I replied quickly "you don't get more English than Manchester tart cake".

Joseph was fractious and all the patrons and staff jollied him along. 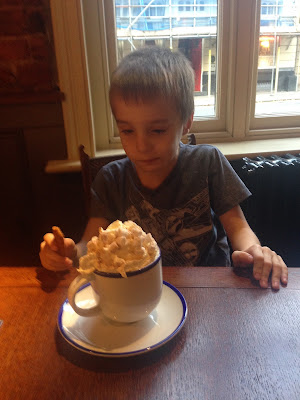 This look is "I really didn't want to like this place". Then the cakes arrived. To be honest mine was ordinary (the chocolate orange) but still fine. But the Manchester Tart Cake was heaven. Joseph shared! I was shocked as his first full funny sentence at not quite 3 was "sharing is for toys not food". 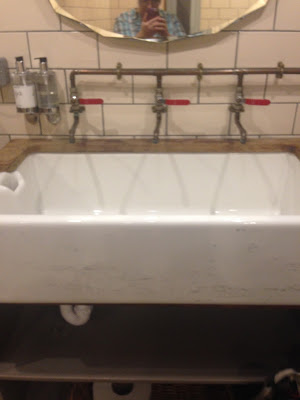 No trip for afternoon tea is complete without the obligatory trip to the toilets. "Mummy this sink looks Irish". How does he know this is called a Belfast sink. We have never spoken about Ireland. 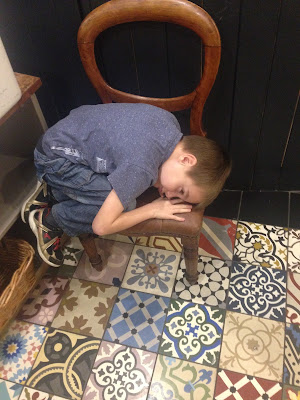 Joseph adored the tiles, and said "these are amazing" I have a tile fetish and adored them too. He even liked the chair. Joseph's hot chocolate was too hot, and so they bought him a little bottle of milk which he loved. 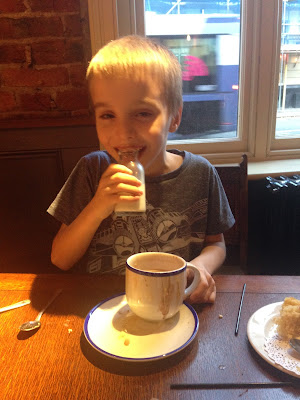 I was happy as I got a lovely natter with my new friend Eiriann and her husband and son. This picture doesn't do this lovely family justice. She looked much more stylish than I did with an 8 month old. She reminded me very much of Leigh. 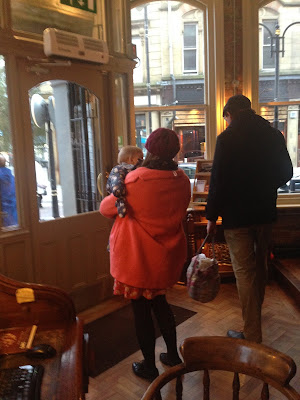 On the way out, Joseph spotted "the moose". He looked intrigued and said "who shot the moose?" I replied that the moose died of old age, he was in fact the oldest deer in Scotland and God had called him to take care of all the baby deer taken too soon. Joseph accepted this without question. 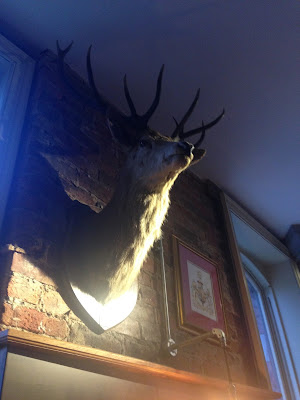 The Clarence is a cosy traditional pub with a modern twist. The service was exemplary. The prices just so affordable, it had a beautiful atmosphere.

I will be going again for sure. Clearly this isn't sponsored content, we fell in the door and were met with kindness and good food.

What more could you ask for?
Posted by Kykaree at 03:19