The Goat in the Bakery 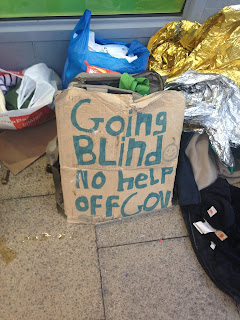 This is the "camp" of my new friend Colin. I try to visit him most days. I buy him soup as that's what he likes the most. He gets given so much food that he usually ends up dispersing it amongst the other homeless. Colin doesn't use illicit drugs or drink. I think he must smoke though I have never seen him smoke but his hands look like smoker's hands.

Colin lost his job as a haridresser a few years ago due to failing eyesight. He lived in rented accommodation that he kept his rent up on, and in August his place sold to a new owner who promptly ejected him and his friends, Colin had nowhere to go. He does manage to sofa surf most nights but not all.

Anyway I left my bags with him the other day as I popped into the bakery to get his soup. This well to do woman stopped me.

"You are brave" she said.
I looked at her with suspicion.
"You left your bags with that um er, you know um"
I smiled "that's my friend actually".
She frowned "he went through your bags as soon as your back was turned".
I rolled my eyes "I don't think so dear".
She reached for my arm "he did I swear"
"Oh he got up did he, he doesn't normally"
She started to flounder a little.
I snapped a little "he has bags of his own next to him, he was reaching into his for some bread as he has loads and wanted some to have with his soup. If he has taken anything out of mine it's either Christmas cards or tampons, so if you don't mind would you let me get on with it?"

It brought to mind my favourite Gospel passage

The Sheep and the Goats

31 “When the Son of Man comes in his glory, and all the angels with him, he will sit on his glorious throne. 32 All the nations will be gathered before him, and he will separate the people one from another as a shepherd separates the sheep from the goats. 33 He will put the sheep on his right and the goats on his left.
34 “Then the King will say to those on his right, ‘Come, you who are blessed by my Father; take your inheritance, the kingdom prepared for you since the creation of the world. 35 For I was hungry and you gave me something to eat, I was thirsty and you gave me something to drink, I was a stranger and you invited me in, 36 I needed clothes and you clothed me, I was sick and you looked after me, I was in prison and you came to visit me.’
37 “Then the righteous will answer him, ‘Lord, when did we see you hungry and feed you, or thirsty and give you something to drink? 38 When did we see you a stranger and invite you in, or needing clothes and clothe you? 39 When did we see you sick or in prison and go to visit you?’
40 “The King will reply, ‘Truly I tell you, whatever you did for one of the least of these brothers and sisters of mine, you did for me.’
Colin has retinopathy. He has fallen through the gaps and I'm trying to get him help.
My MP David Nuttall is on the case so hopefully he knows of a way to help him get secure housing.
In the mean time I can't really afford to buy him soup every day. So I unearthed my soup flask and made him some. I will visit him every day until he finds a home.
I hope this is sooner rather than later, I can't bear to see him alone at Christmas.
EDIT: Update this morning an email received from David

Thank you for your email.

With regard to Mr Johnson we will of course be happy to help him. I have asked my Senior Caseworker Miss Nabila Afilal to contact you.

With regard to Mr Johnson’s eyesight problem I will see if the Bury Society for Blind and Partially Sighted people are able to provide help as well.