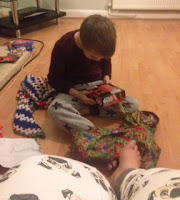 Christmas morning commenced with an excited 6 year old creeping down the stairs and 5 am. I was already up as I get really excited at Christmas. He wanted to open his presents and I reached a compromise agreement that he could open his stocking presents but the rest had to wait until dad awoke. 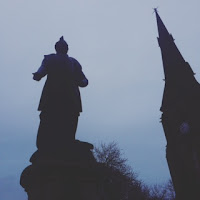 After present opening I walked to church and attended morning service. On the way I saw two women and a white dog acting suspiciously near a wheelie bin. I called out "are you ok?" They shouted back "we are homeless". So I went and said hello. One lady had been homeless but had a flat, the other sofa surfed.

What happened next chilled me to my bone "we are climbing in bins looking for toys for children. The children of crack addicts get forgotten as their parents won't access to the free schemes". These women had got up to search for toys. One of the women had a tyrannosaurus rex in her pocket. Turns out the scary white dog had no teeth.

After church I returned home. My husband requested prawn cocktail. I kind of knew the sauce recipe but tweeted on the #joinin hashtag for ideas. I got it made with some sririchacha sauce for extra zing. 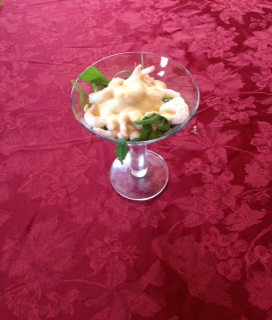 I prepared the rest of the meal and tidied up a bit. As I was busy in the kitchen I heard a sound. I turned around and was immediately terrified as to what I saw. 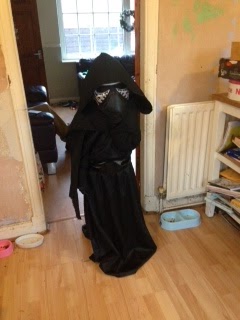 I immediately Instragrammed it as I wasn't sure what or who it was. It transpires it was Kylo Ren from something called "The Force Awakens" I have lived to tell the tale. 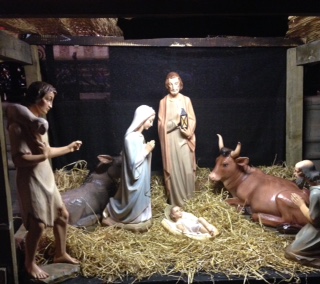 In order to give thanks for my lucky escape from the clutches of Kylo Ren I attended Evensong. I was the only person there! Apart from the priest, so we did it together. It was incredibly moving.

On the way home I saw a family in the rain adjusting the cover on their pushchair. I spoke to them. It turns out they are Syrian refugees. I smiled and welcomed them to the UK. I explained I was from Australia and I had moved to escape bad memories back home. He said "You are refugee just like me."

I asked him if they were Muslim. (only because if we become friends and I cook for them I need to know to cook fish or buy halal meat), he said "we are Muslim but not Isis".

I felt sick. This family have been walking around thinking we all think Syrians are Isis. My dear God.
I said emphatically "You can't be ISIS and Muslim it's impossible. You believe the ten commandments just as we do. Murder is forbidden in both our religions, which have so much in common".

We exchanged pleasantries and they said "Merry Christmas".

I walked home. I started to hear footsteps. They were walking my way.

I insisted they come and see where I live.

I opened the door and said to my husband "look what followed me home". I had previously rung him to tell him what had happened. He welcomed this family, who had to go home or we would have invited them in. Joseph was upset as he was dying to play with the little boy and teach him about Kylo Ren.

I am so blessed to have found this country and I have the best life ever.