In 2014 I met a beautiful mummy on line via Twitter. I have been blessed to have met this beautiful mummy in person too. I have watched her grieve and grow. Leigh is a very special person in my life, as is her son Hugo


Although Hugo lived for just 35 days he has become a very important member of my team at Bliss. One of the big projects I am working on is a palliative care pathway for neonates in the North West of England. One of the essential things that babies and parents need is consistency. I think a lot about Hugo and his mummy and about her journey.

I have become aware that Royal Bolton Hospital are raising funds for a bereavement suite at the neonatal unit and I want to help. Other units in the region have these suites and Bolton need one too. The amount they need is £6680.43. If we can raise more than that then there are other projects at Royal Bolton they need help with. You can see the list here. 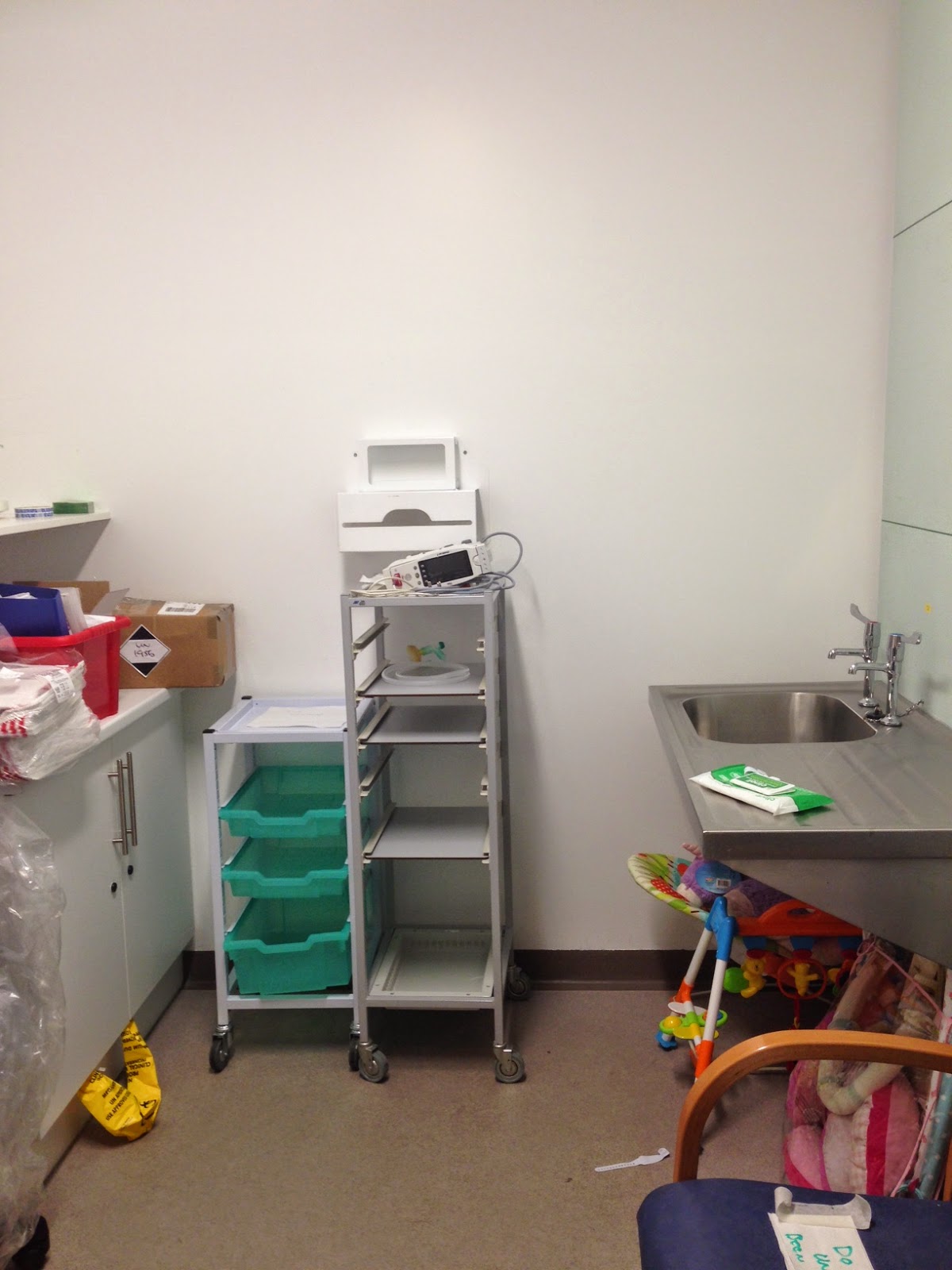 This room will be there bereavement suite at Bolton. As well as a bed and furnishings and decoration it requires a portable ventilator and a cold cot. The Trust is covering the pipe work, removing the sink etc but the rest is down to fundraising and I am desperate to give parents a safe space to go with their baby for their last hours.

This year my big challenge is to lose weight, and walking is an important part of this. The main fundraising activity I will be undertaking is a walk from Bury to Bolton, Fairfield Hospital to Royal Bolton via Radcliffe.

This walk is exactly 10 miles, one mile for every week Joseph was in hospital. This walk will be held on 16th May. I will then walk once a month until the money is raised. This walk is very symbolic for me and a chance to reflect on the amazing journey I have been on with Joseph and what we have achieved since then. Much has been given to us, therefore we have much to give back.

In addition I will start publishing my weight loss recipes on line and would ask that if you like them you make a donation.

I also need people to walk with  me, and to raise funds too. Please visit MediEquip4Kids to find out more. You can join me at Fairfield Hospital or in Radcliffe or cheer along the way!

Every baby and every parent deserves a gentle, compassionate space in which to experience their last moments. Be part of something life changing.

As my 1lb 7oz baby was confirmed as a boy I thought to myself "well I've done half the job".

At 3 in the morning when expressing as my baby learnt to live on his own in hospital, I would often ring dad. Dad was really bad at converting the time difference, so he would never panic just chat to me in his quiet way, telling me how much he loved me and how proud he was of me. And how happy he was to finally have a grandson. 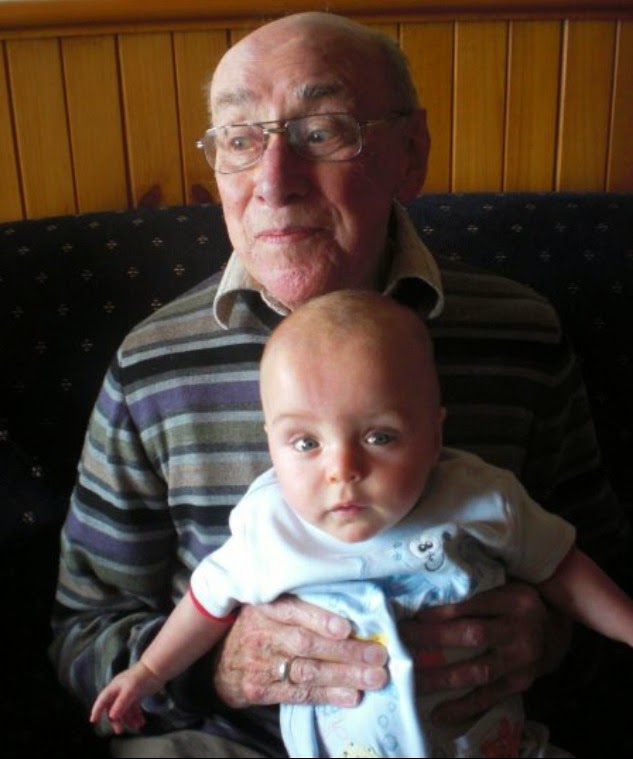 Despite the difficulties, my dad met Joseph 3 times. At 6 months, 21 months and for the final time at 5 years of age. My son knows his Aussie Grandad and loves him dearly.

Funnily enough, it was my dad who taught me about sick babies and losing babies. I was 7 and we were in church, St Edmunds in Mt Nelson that I think may no longer be there. It was almost a shed of a church, perched above Hobart. I loved it there. The minister was talking about a family who had lost a baby, and how we should be kind to them and care for them. I asked my dad why noone was looking for the baby. (who does that remind us of - I think I have given birth to the male version of myself sometimes)

My dad loved babies. He did a lot of my baby care when I was growing up. He weaned me on lamb's brains. He took care of me, bathed me, washed my pandas, and always supported me. He wrapped me in love. 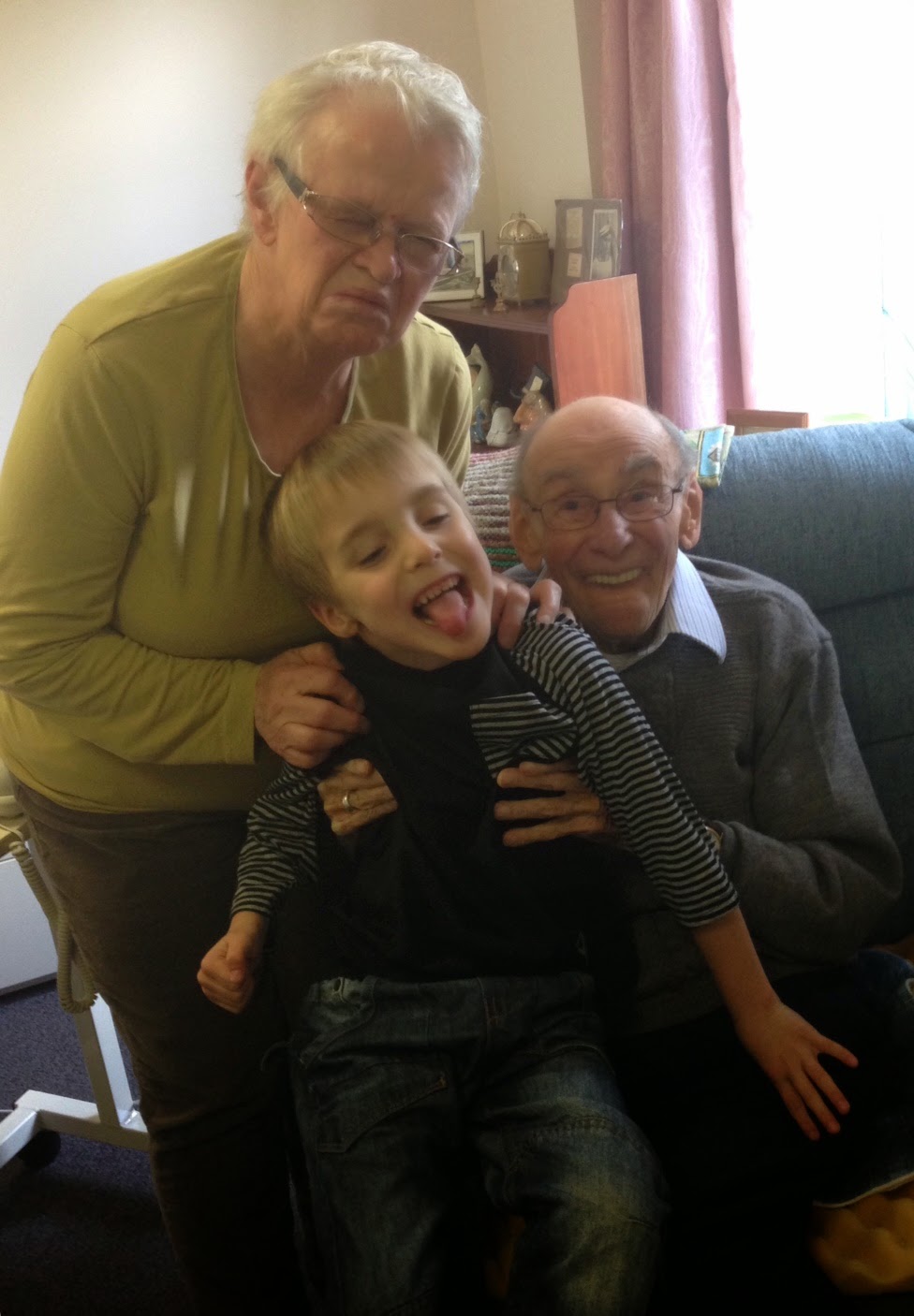 My beautiful friend Jenny said that my father was in heaven taking care of Hugo.  I can just imagine my dad bouncing Hugo on his knee, feeding him lamb's brains (do they have lamb's brains in heaven?) and singing him "Away in a Manger" as he sung to me every night even in July. I can still hear his voice "bless all the dear children in thy tender care, and them to heaven to live with thee there"

I have been asked to suggest a bible passage for dad's funeral. My dad was high Anglican and made his peace with God before he died (his words were The Church but hey) so I have chosen Matthew 18:1-5; 10-14

At the same time came the disciples unto Jesus, saying, Who is the greatest in the kingdom of heaven?
2 And Jesus called a little child unto him, and set him in the midst of them,
3 And said, Verily I say unto you, Except ye be converted, and become as little children, ye shall not enter into the kingdom of heaven.
4 Whosoever therefore shall humble himself as this little child, the same is greatest in the kingdom of heaven.
5 And whoso shall receive one such little child in my name receiveth me.
10 Take heed that ye despise not one of these little ones; for I say unto you, That in heaven their angels do always behold the face of my Father which is in heaven.
11 For the Son of man is come to save that which was lost.
12 How think ye? if a man have an hundred sheep, and one of them be gone astray, doth he not leave the ninety and nine, and goeth into the mountains, and seeketh that which is gone astray?
13 And if so be that he find it, verily I say unto you, he rejoiceth more of that sheep, than of the ninety and nine which went not astray.
14 Even so it is not the will of your Father which is in heaven, that one of these little ones should perish.

I will miss my father, and I am hurting like nothing on earth right at the moment. But I am safe in the knowledge that he loved me, that he gave me my compassionate heart, my belief in babies, and my fragmented, messy faith.

I am my father and he is me.

And my beautiful son is the grandson of an amazing man.

Do not sleep my dear dad, stay awake and look after those babies til we can see them again.
Posted by Kykaree at 13:05 5 comments:

Teaching Children Not to Rape

People who know my blog will understand why sexual body safety, rape and little children are a big concern of mine. My journey as a survivor began when I was 3 years old. By the time I got to late primary school where our "sex education", such as it was, began, it was too late for me.

I strongly believe that the foundations of good sexual behaviour in later life need to be built early on. Not in a frightening, salacious way, in a way that is calm, measured and well thought out.

I strongly believe there is only one set of people who, at the end of the day, are responsible for ensuring the safety of their children, and that's their primary caregivers. Parents, most usually or guardians. We can't rely on the school system, on the media, on others. It's our job.

And safety isn't just teaching children about their body, it's teaching about other bodies, and about who has rights to those bodies.

We have to teach our children not to rape.

It isn't "sad". It's a fact. We teach our children not to steal, not to murder, to be good people. We have to teach them not to rape. Starting at 17, the age of consent, is way too late. Hands up those who waited til the age of consent to be sexually active (I did but I believe I'm not the norm)

Rapists aren't slimy creatures that live in drains like mutant turtles. Rapists are people who can't control their urges, who think sex is their right, who make errors of judgement, get caught in a moment and can't escape from it. Rape once you are a rapist, rape 100 times you are a rapist. A rapist  might be a person who is generally "a good person", perhaps a person who gets drunk or high, who gets caught in the wrong crowd, who loses their inhibitions due to drugs or peer pressure, it could be a one off incident in an otherwise non violent sexual career.

This is no way whatsoever rape apology. Not at all.

As parents and caregivers we have to get inside the mind of a rapist to ensure the children we love and care for understand, and understand not to rape.

The easiest things to teach are this.

This is a tool developed b the NSPCC. I do this at home but also in public. Our GP surgery has the leaflets in reception and we chat about it there. The PANTS rule is not at all confronting or scary.

Consent and keeping other bodies safe

You can extend the PANTS rule to ensure that children know that this truth exists for everyone. That as their privacy and consent is to be respected, they are in turn to extend the same rule to others.

I think "no" needs to go further. To ensure a child does not become an adult who rapes they need to be aware of active consent. That the person they choose to be intimate with has actively engaged in the process to move forward they have not been cajoled or coerced, and that they have the presence of mind to do this, i.e. are not under the influence of a substance or person etc.

We need to get rid of  the fairy tale of sex.That our children are going to fall in love and have sex with someone they are deeply committed to.

In reality our children at 5 may only be 10 years away from having sex. The time to start is as early as possible.

You don't have to mention or talk about actual sex until much later, but the sooner you start building the scaffolding, the stronger your structure will become.