The Battle of the Boob 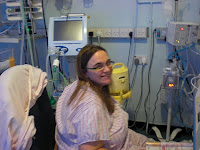 When I was dreaming of being a mum, and all through my rather brief pregnancy. I knew I would breastfeed. To me it just wasn't a choice, it was the natural thing to do. Its free, its portable, and its nutritionally sound. Also being a lifelong asthmatic I was aware of research stating that breastfed babies have some protection against asthma (although the research is not conclusive)

When I was told I would be having Joseph at 27 weeks, I was still determined that I would breastfeed. I knew I would be asked to express milk for him and later we would be able to try and establish breastfeeding, once his suck/swallow reflex had started to develop. A consultant came to see me in special care and asked if I would consider expressing. I looked at him and said "I am completely committed to breastfeeding my special care baby" He ran through how many extra calories I would have to eat, and gave me licence to eat as much dark chocolate as I wanted!!!! Bliss!!!

12 hours after he was born, two midwives came to see me to start expressing. (I know I'm a big lady, but I didn't think I was a two person job!) As I was so weak and covered in rather large needles, they milked me like the proverbial dairy cow. They were very apologetic "we are so sorry this isn't really dignified for you", my sense of humour remarkably still intact I grinned "for someone who has been pregnant and produced a baby there has been suprisingly little interest in my cervix, so this is certainly preferable!"

I was then given a pump (you can see me expressing my Joseph's incubator at 3 in the morning in special care in the photo above) and for the next 9 weeks, expressed every 3 hours.

Unfortunately my milk supply went to nothing at around week 8. I struggled on. Joseph was still under 4lb and just couldn't manage to suck. We continued to struggle. At this stage he was still in hospital. I later learned that magnesium sulphate (which I will discuss in another post) can harm your ability to lactate months after the treatment.

One teary night, I knew I had to make a decision. To keep trying to express and establish breastfeeding, or to give up and go to formula.

I cried and cried, I felt an utter failure, I couldn't keep him inside long enough, and now I couldn't even nourish him from my own body. All my dreams were disappearing in front of me.
However, the day I gave up my dream, discharge planning was put in place. Joseph tolerated the formula, bottle fed like a pro, and 2 weeks later he was home where he belonged.

Breast is best, and I will always believe that, however, sometimes, formula is just as good, and completely necessary. Perhaps its coincidence, but on my milk, Joseph stubbornly stayed under the 0.4th centile for weight. Once I gave up and he went on formula, he started to make a climb up the centile charts. Now he's eating a full mixed diet, that I prepare, so I am now providing his nourishment, not some nameless, faceless, multinational conglomerate milk firm!

But poor old Green & Blacks might have to call in the receivers!
Posted by Kykaree at 19:06