My Precious 'Bag of Sugar' 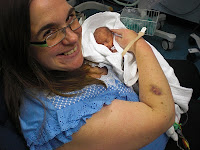 Meet Joseph. Lovely isn't he. Not even a bag of sugar! In this picture he weighs just 652 grams. Take a bag of sugar out of your pantry. Yes, now. Hold it, look at it, marvel at just how tiny a human can be.

This picture was taken in May 2009, dreadfully hot, an early English Summer. That's me in the picture, the first time I held my darling son, at just a week old. The bruises aren't from a bar fight, they're from my friendly anaethetist. I had severe early onset pre eclampsia. Not. Fun. At. All.

I've spent a good many months thinking that pre eclampsia, and the early birth of my son was the most horrendous thing that could have happened to me. I had a six month pity party. Balloons, cake and everything.

Until I woke up. Joseph is the greatest thing in my life (apart from my husband of course). He is a precious gift. Ok so childbirth was not how I expected it. And I expected Joseph's first bed to be a nice cosy crib, not a cold hard incubator.

But I have learnt over the past months that things could have been so much worse. Women in 21st Century England still die of pre eclampsia, babies are still lost.

So my not even a bag of sugar is now many many bags of sugar! A pallett!

Joseph has inspired me to blog, not just about premature babies, and my experiences, but everything that touches me. Especially baking, now that takes a bag of sugar!