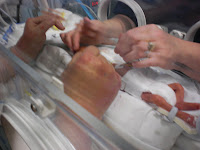 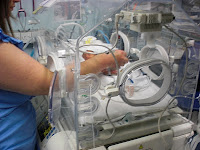 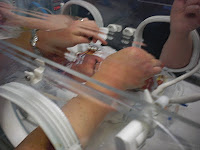 When Joseph was in special care my overwhelming feeling was isolation and separation. I was in hosptial for 8 days. I was kept in a room on my own, in antenatal. Which was lovely because I had my own space and was away from the mums with babies. Except it made me feel like a freak. I wanted to talk about my baby, and share those first moments with other mums.

I remember feeling a pang of sadness as I watched babies with their mums, and people making noises about smelly nappies. I would have given anything at that point to change my babies nappy.
My opportunity came two weeks after Joseph was born. It was carefully planned and orchestrated that I would do Joseph's "cares" one evening. Joseph was still well under 2lb at this stage. His skin was transparent. He looked like a miniature old man! A beautiful old man!
I felt so nervous, I stood in front of the incubator looking at my beautiful teeny baby, and marvelling at him. Fabia, one of the senior neonatal midwives stood on the other side and talked me through it.
It was just so lovely doing something so normal. I was worried I wouldn't manage, with just my hands through the portholes, still separated from my little baby, but so much closer. It was like changing a nappy on a little hairless kitten! He had no fat at all, he was just soft skin with bones protruding. Its hard for me to imagine those slim small legs when now he has delightfully baby-like chubby thighs!

Over time it got easier. Corey and I shared care times, I would do the morning, and he would do the evening. It was the highlight of his day, and mine. As we got more competent, we were left to get on with it. It was like having a baby, almost.

But once Joseph moved to HDU things got complicated. Although only in the next room, care times got messed with and confused as there were more staff and communication was not always clear. I remember one day ringing my sister in tears because a nurse had messed up and done Joseph's cares. For six weeks I had been going in at 11am and all of a sudden they decided to change it. I was devastated. I went out into the carpark and cried and cried. I felt like they'd taken the one meaningful task of my day away from me. And they had. When you only get to touch your baby once a day for five minutes, every second is precious.
Even now I take no nappy change for granted. I enjoy that intimate time with Joseph, and its even more fun now that he giggles and blows raspberries, and tries to put his feet in the contents!