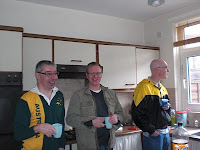 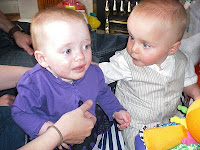 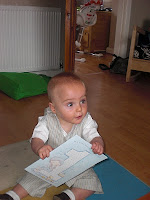 Yesterday Joseph turned one. He has been in our lives a whole year. This marvellous, inspiring little boy.

I was amazed at how much he realised it was all about him. And to see his personality shine through with the other babies. Kate, the photo in the middle, is Joseph's best friend. She has had a difficult beginning, losing her little sister in the womb, and having to be born early as a result.

She cries a lot, and Joseph comforts her, like he did yesterday. And passed her toys to cheer her up.

He opened his presents and played with them all, he was so appreciative of them all.

He worked the room, cuddled everyone, and had a fabulous day, and would not stop smiling.

And neither did I.

It's been the hardest of years, not knowing what he'd be like at 1, or whether, at times, he'd be here at all.

I've had months of feeling terrified and traumatised, and on medication. I was so eager to come off the citalopram wonder drug before his birthday, and I've managed this goal.

I feel like his birthday has just put a wax seal on the year, and I can really, truly enjoy this marvellous little man and focus on the coming years.
Posted by Kykaree at 10:14