Last week was International Pregnancy and Infant Loss week, culminating in the International Wave of Light. We light candles to commemorate tiny lives that have been lost .

Until Joseph was born early I was entirely ignorant about baby loss, despite myself having had two miscarriages. My miscarriages were traumatic experiences, true enough, and each of them marked a massive turning point in my life. Following the first, my marriage broke down (not due to the miscarriage itself but events around it) and the second marked the demise of another relationship and my decision to move from Australia to England.

To me, a miscarriage is so hard because its a loss that is hard to quantifiy. Biologically speaking when you have a miscarriage (and really I am talking about common ones before 12 weeks) you have lost a collection of cells not a baby, not a viable human life. Emotionally you have lost a baby. To a woman who has miscarried, that baby was very real, and the loss is raw, and it is so hard to grieve, you did not know the gender, you can't name the baby, and no one in authority acknowleges that that life was real. A candle lit for that baby gives you a focus, if only for an hour.

Before Joseph was born, I had not knowingly met a mum who had lost a viable baby. Which to me, seems remarkable, and I can only think that perhaps I have friends who have not opened up about their losses. When Joseph was in hospital three babies died. I finally learnt what many others already knew, that human life is incredibly fragile. I have a dear friend who lost her twin baby girl, and her existing baby, although a joy, is a daily reminder of how the other little girl should be. Being the mother of a premature baby, who had been born so early, and so small, it is hard not to feel an element of "survivor guilt". Why did Joseph live, why is he so well? Why was his potentially deadly stomach infection caught so early when so many other babies are not so lucky?

Since coming home, I have been very active online, and have met so many people who have had devastating losses of babies who should be in the arms of their parents. There are so many reasons babies die, but the sad fact is that the rate of stillbirth has been stubbornly stuck for years, and there are no signs of the rate going down.

And its not just stillbirth and miscarriage we think about it that week, we think of any baby who has died before the age of one. It is very common for premature babies not to make it, infection, immature breathing and congenital problems.

We also grieve those that are terminated for medical reasons. I feel this area is largely misunderstood, and is the last taboo in this area. We can speak more freely about other forms of pregnancy and infant loss, but this area is still in the dark.

For the first time, I know a baby who died in this way, her candle was lit on Friday night, and her life remembered. This baby had a heart condition that she would not have survived.

But, you don't need to wait for a "week" to remember a baby who has died. And it doesn't need to be "your" baby. I strongly believe that lighting a candle helps focus our thoughts, and helps facilitate our grief.

In loving memory of Emily, Isla and Angel, and all the other little lives lost and remembered......... 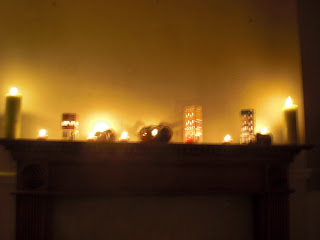