Happy is the Home...

Happy is the home with at least one cat - Italian Proverb. 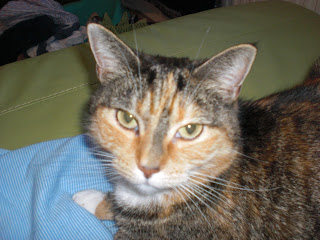 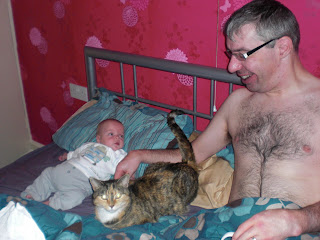 I do apologise for the half-naked husband shot, I should have photoshopped a pyjama top on him!

Anyway the furrier thing in the middle is Atticus Woo. She's a girl (despite the boy's name).

When Joseph was due to come home, we asked if we should send Atticus to a new home. We were concerned about cat fur and exacerbating Joseph's chronic lung disease, as well as the more obvious worries most new parents have, about cats smothering the infant etc.

We need not have been concerned, Atticus is the perfect pet. She has never got into Joseph's bed, she has always reamined a respectful distance.

It was funny when we first brought Joseph home, in the picture above he'd gained at least 3 pounds and is beginning to look the same size as Atticus, but when we brought him home, Atticus positively dwarfed him. It was terrifying. Up until that point we had been confident with Joseph, his small size had become perfectly normal to us, but when Atticus came and looked at him, we both became a little less confident.

Atticus has always been the perfect mum to Joseph, even before he was born. When my pre eclampsia was worsening, but I hadn't been diagnosed, Atticus never left my side. When I went to bed the day before we went to hospital, she stayed with me the whole time, not letting me go into a deep sleep.

When I came home from hospital, without Joseph, Atticus was completely confused. She checked our walk in cupboards, the fridge, and even the oven, thinking I'd absent mindedly left him somewhere. She very much relaxed when he finally came home.

As Joseph has grown, Atticus and Joseph have become great playmates! She has never scratched him despite his rough play (the baby sign for gentle has very much helped) they chase each other around the living room (I am convinced Joseph's amazing climbing abilities are due to his desire to be near Atticus) and they play with toys together, its quite lovely.

I have always had cats as an adult, and whilst Atticus was very much my husband's cat, already ensconced when I moved in, she is a very important part of our every day life, and I can't imagine parenting Joseph without her help!
Posted by Kykaree at 20:46