Love's Labor's Lost - it could have been me 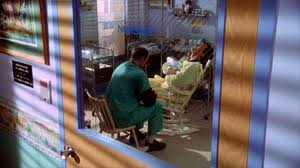 I am not a huge fan of "modern" TV drama. I am getting grumpy in my old age, and feel that all the good television has already been made. I recently subscribed to Sky, and now have a facility to record programmes, so am recording all the ER episodes right from the beginning. Yesterday I watched Love's Labors Lost, from series one.

I remember watching this originally back in the day, I must have been about 23 or so. So a long time ago. Since that time George Clooney has been in more blockbuster films than I've had hot dinners. ER has ceased to exist. Many of the actors that were household names, are now directors and stage actors.

My initial feelings about this episode back then were that it was good drama but entirely inaccuarate. Surely women don't die in childbirth in the latter half of the 20th century? Eclamptic shock sounded like something out of an ancient medical journal. Never, in a million years, did I consider for a moment, this could be me....

To give a brief synopsis, a healthy woman in her 38th week of pregnancy presents in the ER with frequent urination, and just feeling off colour. Dr Green diagnoses a urinary tract infection and sends her on her way, in the care of her husband. No other members of the team offered the differential diagnosis. The woman in question and her husband weren't educated enough to say "hey what about pre eclampsia"? She then collapses in the parking lot and is brought back in.

What happens next is a protracted and complex affair. She has a full blown eclamptic seizure, which is stopped with magnesium sulphate. She recovers from this quite quickly and is able to talk to Dr Green and her husband and some decisions are made. Dr Green measures the fundal height and determines the baby weighs about 5-6 pounds. He makes the decision to induce labour, rather than taking her to Obstetrics for a caesarean. During the section the woman has another seizure, and the baby gets stuck, a condition called shoulder dystocia. Dr Green can't get the baby out, decides to push it back, and then go to crash section.

It transpires that when Dr Green did the ultrasound, and determined that the baby was a girl, he failed to spot the fact that the placenta had abrupted. So once the baby is out (and not breathing but is resuscitated, happily) the woman starts bleeding profusely, and sadly, dies.

The picture I have selected above is Dr Green speaking to the husband, telling him what has happened to his wife, whilst he holds his baby in the NICU.

Obviously, being ER, this story is dramatic, and I think still, a little far fetched, and I truly hope ER doctors don't handle these cases willy nilly without handing them over to the proper personnel.

However, I can see how this happens. My pre eclampsia was nearly missed. When I went to the delivery suite, most of the midwives thought I was possibly neurotic, but, crucially, checked everything out in fine details, and my severe, early onset pre eclampsia was detected and treated.

But, watching this yesterday, my thought was, this could have been me, and the only reason, if we're honest, is that I had tip top medical care. I had a team of doctors and midwives who were skilled, and who utilised all their resources (there were several phone calls with experts around the country as to how best to manage my care) and both myself and my baby were safe and sound, and are here to tell the tale.

But, as dramatic, and inaccurate in places, this episode is, it serves as a reminder that without good, cohesive medical care, sometimes, childbirth can be risky. I am passionate about good antenatal care,about educating prospective parents about possible complications and about good emergency care, and this really reminded me yesterday what I am fighting for when I work as an activist.