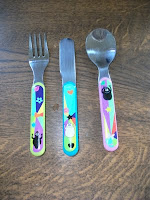 It's funny the things that excite me now I am a mummy! The picture here is of a rather cute cutlery set. My sister in law, Joseph's Auntie Tasha bought this for him when he was little. When he received it he hadn't even started first tastes of weaning.

I have blogged about weaning before, but basically I decided to do a combination of baby led and traditional weaning, that I nicknamed "collaborative weaning". Joseph's manual dexterity and hand eye co ordination at 6 months was just not sufficient for baby led weaning. So I would make puree, say of avocado, serving a slice of avocado next to it, and we'd explore together, and he'd even eat some of it! It was messy, but fun!

Unfortunately one of the limitations of this approach was that Joseph got used to his fingers early on, which is great, and he's been independently eating for about a year. But, he eats like a savage! A tidy savage though. Watching him eat corn on the cob or a chicken drumstick is a delight. And he'll eat "finger vegetables" like peas and roasted vegetables, but Joseph decided a while ago he wasn't going to eat anything mushy or even mashed, as it got his hands sticky and dirty. He wouldn't allow cutlery in his mouth, unless it had yoghurt on it!

As chief cook, this has proven to be tricky. Things I used to rely on like fish pie, cottage pie, even casseroles and stews have been restricted. I still cook those things occasionally but make sure I have plenty of Joseph-friendly side dishes.

Last night, however, was different. I'd cooked roast beef on Sunday, and decided to use the left overs for cottage pie. I put Joseph's cutlery on the table, and waited. He did it. He ate all his mushy dinner with his fork and spoon!

Now it seems so silly how excited I am by this, but I feel like I have a very clever, but also, very ordinary toddler! He can eat his food with cutlery, he can walk, he can talk, and he's just normal!

And he's almost caught up to his peers. I am contemplating sending Joseph to pre school for 2 mornings a week in September and was worried he'd be like a baby in his class, but he's doing just great!
Posted by Kykaree at 08:26