I am very proud to be involved in RSPCA’s Twitterthon #RSPCA247, raising awareness of this charity which has become, in its long history, an institution. But how many of us really understand the scale of the work that they do, and the money that it takes to do this important work? I certainly am guilty of taking the existence and the work of the RSPCA for granted, so please, get involved, and read the other blog posts that have been provided to highlight the work of the RSPCA 24/7. 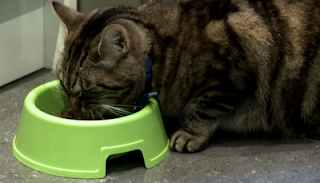 Since the age of 14 I have always been owned....by a cat. I love the old saying “dogs have owners, cats have staff” And for a long time I have been a very happy staff member. I have had several owners, my current owner is Atticus Woo. I also have another owner, Niow Niow, named by Joseph, a small grey cat who has a staff member who doesn’t understand his needs. So he comes to us. It is estimated that there a 8 million domestic pet cats in the UK, that’s a lot of people who are loved and cherished by their feline friends.
Sadly Niow Niow is not alone. Last year the RSPCA Frontline team rescued 31,361 cats from neglect, danger or injury in England and Wales. Not everyone understands and respects the needs of their cat, or they may find themselves, particularly in these trying economic times, of not being in the position to care for their car as they would like to. The other area that worries me is neutering and spaying. It seems natural to me to spay or neuter a cat. Not only does it prevent procreation, but it makes the cat a much nicer animal to have in the house.

I have had experience with the RSPCA, many years ago I was asked to take in a cat, a beautiful black and white girl, Chloe, who had been rescued from a frightening and perilous situation. The dogs taken from the same home were so poorly they had had to be put down. The RSPCA staff were unable to catch Chloe, but a neighbour managed to get her later, and passed her to me.

It became apparent that Chloe had got herself in trouble and was well and truly pregnant. We decided that due to the lateness of gestation of the kittens, it was safer to continue with the pregnancy. I was able to rehome one kitten, but the remaining had to go to the RSPCA centre near my home. I was bereft and in tears, and angry, that initially the staff had thought I was an irresponsible owner, not realising the situation. And they promised to do their best to rehome these beautiful little kittens.

What many people may not know is that the RSPCA is funded purely by voluntary donations.  Furthermore, the RSPCA receives an emergency phone call every 30 seconds. Every day the RSPCA responds to around 1,000 incidents a day, rescuing, caring for and re-homing animals that have been trapped, abandoned or hurt whether it’s 2pm or 2am.

If you care about animals, if you are passionate about your own pet, please donate to the RSPCA, whether you can afford to do so regularly or make a one off donation.
Posted by Kykaree at 08:30