Kieron's mum Victoria is a fellow Bliss campaigner, and I met her, all too briefly, at Westminster last week. Here is Kieron's amazing story. 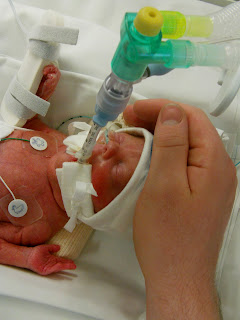 Kieron’s journey began on the 27th November last year. That night, a Saturday, I really felt drained, achy and in pain so I decided that first thing in the morning, I would phone maternity day care and get them to give me a check over as I’m a type 1 diabetic as well. I wasn’t “overly” worried as id had a split pelvis while pregnant with my daughter and this felt pretty similar. I took some paracetamol and went to bed at 9.30.

At 2.30am, I woke up with severe stomach cramps and the feeling that I had wet myself. I tired to sit up and only then did I realise, it was blood. What happened next is a blur. I remember my husband calling an ambulance and me phoning my mum. I can never truly explain the empty feeling that I had. My “bump” felt heavy and no amount of prodding and poking made him move. I kept whispering that he’s died.  My mum got to me just before the ambulance did and came with me to the hospital. My husband, Matt, stayed at home with our daughter, at my request. During the 5 minute dash to the hospital, id lost even more blood and I was now convinced that Kieron was no longer with us.

We was taken to the maternity emergency ward, where I was assessed and scanned. To my amazement, there was Kieron kicking away. I cried and I cried hard. Next, the doctors needed a urine sample. Still grinning like a Cheshire cat, off I went to the toilet with the doctor. He did a dip stick test and that showed that I had a raging water infection. I cant explain how I felt at that moment. All this because of a water infection !! I came out the toilet laughing and telling  my mum that it was just a water infection and how I was going to get some antibiotics and be discharged. In the back of my mind a voice was screaming, what about all that blood ? There’s something else here ! As soon as I got back to the side room, the doctor said that he would do a very quick internal and then they would start some medication. Still smiling, I agreed and laid down.

What happened next will stay with  me forever. The doctor just said “err, right, ok. We need to move you, your 3cm dilated, your in labour”. I remember throwing my hands over my face and thinking, no, how is this happening, I cant be. There is where my emotions shut down. I was given the first of two steroid injections and now they had to work out if I could hold on 12 hours for the next one. I had another scan that showed Kieron was laying transverse, so I would need a C-section, then another scan showed him laying breech so I could deliver normally. Delivery normally, was I hearing them right !!!??

I was taken to delivery suite and given another internal, bearing in mind the first one was only done half hour earlier. This time, I was the full 10cm, Kieron was coming !!!

I phoned my husband who then arranged for a good friend to have our daughter. He was with me within 15 minutes of me telling him. I was still losing a lot of blood and now the contractions were getting stronger. I think my named midwife was starting to panic as she hit the emergency call button in my room after Id  lost even more blood. Another doctor came into my room and said in an uncaring way, that babies born under 28 weeks tended to suffer all sorts of complications and generally didn’t survive. He said that Kieron being born at 24 weeks didn’t have much chance of survival and told me about him being born with brain damage and would be deaf or even blind.  Just as quick as he came into my room, he was gone again and I never saw him again.

I was convinced that although Kieron was fighting from inside the womb, being born would kill him. A crash trolley, incubator and other things were wheeled into my room. This was it. My son, was now ready to enter the world. He was eventually born on 28th November 2010 at 11.50am, weighing 740grams, 1lb 10oz. He was also born in the sack which was to give him every vital chance that he needed to survive. Then panic set in, I could see the doctors and nurses rushing about, shouting for this that and the other. And then he was taken from my room into NICU. As soon as Kieron was taken from me, it was like it had happened to somebody else or like I was watching the latest episode of Holby City. Id only seen him for about 20 seconds.

After the placenta was passed, doctors told me that it was full of blood clots. Id had a placental abruption. We was lucky to be alive because if a clot had of broke free and travelled in the body, it could of killed me or Kieron. I looked at it that Kieron had saved me. 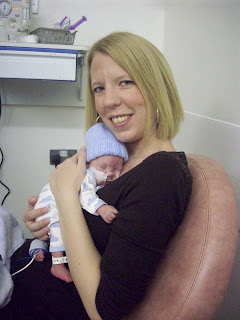 I was kept in over night and given 2 blood transfusions but I discharged myself the next day because I needed to see Kieron. My husband had travelled to The Royal London Hospital in the neonatal ambulance with Kieron and was able to meet the team of specialist doctors and nurses who were going to do everything possible for him. Matt sent me a picture of Kieron but because I hadn’t seen him properly yet and was in complete denial still, I couldn’t look at him as mine. I first saw him on the Monday and was completely unprepared for what I was going to see. Matt had told me what he looked like and warned me about the bleeps, tubes and wires that he was hooked up to. I took a deep breath and in I went. There in an incubator, laying under a plastic sheet and surrounded by tubes and wires was Kieron. What I wasn’t expecting was how he looked. His skin was blister red and see through, he had no ear lobes, just holes in the side of his head and he was only 9 inches long. The nurses said that I could touch him and even doing that took me 10 minutes of building up courage.

That is where our long journey started and where most of my memory is short. I can remember travelling to see him, I can remember endless talks with the consultants and nurses. But as soon as I entered NICU and sat next to him, my memory is poor. He was diagnosed with neonatal heart failure, a PDA and chronic lung disease, within the first week. He also had a small bleed on the brain and also ROP stage 2 diagnosed at a later date. Kieron spent a total of 15 weeks in hospital, 7 in NICU at The Royal London and 8 in SCBU at Newham General Hospital. The PDA was closed, thankfully without the need for surgery, the ROP had reverted back itself without medical intervention and his brain bleed was very minor. His lungs however are still somewhat damaged now and he has 2 inhalers to help.

Kieron  will be 1 on the 28th November and I still look at him with a tear in my eye sometimes. He has come so far and with each milestone that he reaches, I shout it from the rooftops. I am immensely proud of him and for all that he went through, still smiles and laughs ! To look at him now, he is the picture of health and gives so much love, although he is still small and wears clothes for 3-6 months old. With his cheeky grin and big blue eyes, people are in complete awe of him. The closer it gets to his birthday, the more I’m starting to remember from our journey. I think only then will I be able to deal with the emotions that I shut out. 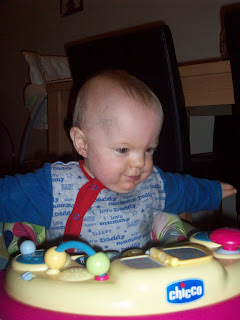