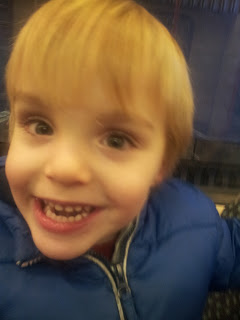 One characteristic Joseph has always had, is that he is absolutely hilarious. Now he has discovered that words make sentences, he's just a scream! He also has mastered the deadpan delivery, that I can't seem to do.

The other day we were walking back from my friends house, and we were near the road. "Hold my hand mummy" he said as we neared the road "be careful mummy, be careful near the road". Yes thanks son I'll be careful.

His new game is to sing "Little Miss Muffet", only our little miss muffet doesn't sit on a tuffet eating her curds and ways, she eats a carrot. Cue laughing and giggling as I stumble and then tickle him until he gets it right!

Joseph is learning new ways to embarrass me every day. The other day I made him walk a long way, and we popped into the supermarket to get baking supplies for my gluten and dairy free baking adventure. Yes, a winning formula with an overtired child who has walked that bit too far. He started to get really fed up and shout "take me back to my mummy!". Some rather suspicious looks from passers by!

Perhaps my favourite Josephism from the past week is when I was dancing the other day to my Just Dance game which I do when he is in bed. He came down from his nap and said "what were you doing mummy?" and I explained I was dancing. He grinned and said "try again mummy", so I did another one. "Oh mummy, another one another one" So I ended up doing an additional hour of dancing. Now whenever he is bored of the telly he passes me the Wii remote and says, "Mummy dance for Joseph". I've lost 5lb in the last two weeks, so I guess I have to thank my pint sized personal trainer!

I shall leave you with Joseph's dinosaur arrangement that he did the other day whilst waiting for dinner. 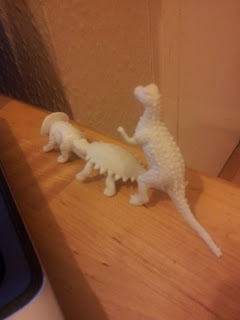