Niow Niow - When A Cat is Not Your Cat 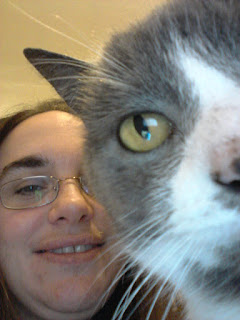 On Wednesday our cat, Niow Niow, went missing. She walked out the door to get some sunshine and never came back. I was bereft. I posted on Facebook and Twitter I even rang the RSPCA!
Niow Niow was a funny cat. In November 2010 we saw her eating bread off frozen snow in our back garden, and we started feeding her. Every night she would come for tea at 6pm on the dot. Her fur was missing in patches, she looked a bit lost and a lone. In October 2011 we decided enough was enough and she could move in.
Niow Niow was a very loving cat, she would lie next to me on the sofa as I read or used the computer. I am often on the lap top in the kitchen and she'd sit by my side, many a blog post was written with her input. 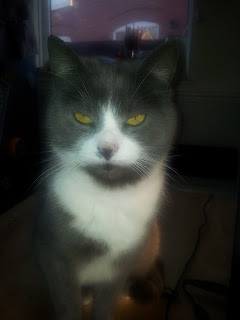 In late January Niow Niow was sick. She had a 24 hour period of massive vomiting and we took her to our emergency vet. I did explain she was a stray. He gave us omeprazole and sent her home.
On Thursday my friend Simone came around to help me look. She spoke to one of our neighbours who seemed to think the cat was called Pebbles and had gone home. I thought it was a red herring. How could the cat we had been taking care of for over a year possibly have a name? And a home?

On Friday night one of the mums from preschool came over. She said "you have had my cat". Niow Niow is pebbles. She's 12. She is a cheeky cat, having at least six houses that feed her. She hates the cold, so didn't question being allowed in for winter.
Niow Niow is dairy intolerant. I don't give cats dairy but Joseph would give her cheese sometimes. That's what the vomiting was. Shockingly Niow Niow is microchipped. I am very cross that the vet didn't do this at the emergency appointment. What's the point of having your cat chipped if it isn't checked? Especially when I said she was a stray. Niow Niow also has a dermatitis problem, that's why she looked bedraggled at times. She is normally given a steroid injection for this.
We can laugh about it now, and I am very grateful I had her for as long as we did. The look on my neighbour's face when she turned up must have been priceless. Pebbles has lived with her for well over a decade.
As well as a lesson in the fact that cats are very independent, selfish little beings, its a lesson in talking to your neighbours. I know this woman, not well, but we have spoken in the past, but she never mentioned her cat! She's even been to my house before, but just not spotted Niow Niow/Pebbles.
So all's well that ends well I guess. But it has made us decide that we definitely need another cat!
Posted by Kykaree at 07:44