Ring of Roses - Mums of Premature Babies Working from Home

One of the things I want to do with Not Even A Bag of Sugar is create some resource pages. My plan is to have a page of premature baby product resources, a page of charity links, and also a page promoting the work of mums who have chosen to work from home. If you would like to have a little promotional advert on my page contact me. It is free and always will be. 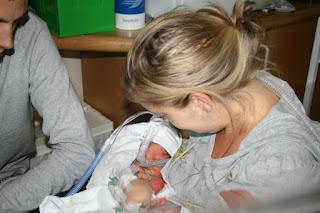 My first mum that I am featuring is Laura, mum to Rose. I met Laura through Bliss, and am in awe of the beautiful things she makes and sells on her Ring of Roses Facebook page.  Here is their story.

My pregnancy was not easy from the start, I bled from 8 weeks and was hospitalised on many occasions but they couldn’t identify any reason for it. Eventually, I was diagnosed with placenta previa. They ran through the risks with me and put me on bed rest. Unfortunately, 22 weeks saw a big bleed, and the phrase ‘not viable’ was used, I became more and more disconnected with my unborn baby, I didn’t want to love someone who wouldn’t make it.
At 29 weeks, I was scanned  and told that my placenta had moved! I was very relieved and despite losing my plug, I managed a couple of weeks of ‘life after bed rest’.  Unfortunately at  32 weeks  I thought I had wet myself in the car, on investigation, it turned out that I was bleeding, and badly. I made my way to hospital where my uterus contracted (at least I had one!) and stayed that way. Hooked up to monitors, all I could do was lie and wait as my body spontaneously gushed with blood and doctors decided how best to manage the situation. It was explained that it was a balancing act, leave baby in so I could get both steroid shots, but not leave her there too long so that both of us end up in trouble. Somehow I made it through the night, I was eerily calm, pressing the buzzer with each gush and refusing all pain relief.  About an hour after the second injection (they are 12 hours apart) there was a pop and a huge gush – and the midwife happily announced that I’d wet myself...I’m sure you’ve already guessed, it was my waters. A second gush came and a doctor confirmed that indeed my waters had gone. The room was then a buzz with medical staff, forms for me to sign and talk of ‘risks’ ‘complications’ and ‘NICU’. The c section was like an out of body experience, I remember the surgeon peering over the screen and happily saying ‘OK, let’s have a baby’ and me thinking ‘this woman’s on crack’. 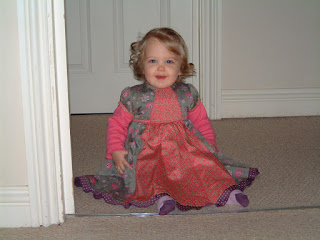 My beautiful little girl was delivered on 2nd September 2010 weighing 4lb 4oz. She breathed unaided for 8 minutes before encountering difficulties and being intubated. I was in recovery when this happened and was told that they couldn’t take me to see her at that point because she was being worked on. My response? ‘OK’!  I was eventually wheeled through to the world that is NICU; beeps, alarms, smells, feeding tubes, canulas, ventilators, CPAP... None of which I had a clue about. My little girl was snuggled up with tubes and wires, all I can clearly remember was that she had lots of hair and a hat on that I would never have chosen for her (her clothes became somewhat of a distractive focal point to me during our stay!).
As any prem parent can relate to, it takes a while to adjust to life in NICU. I was blessed with somewhere to stay for the entirety as the hospital had a patient hotel with suites specifically for NICU parents. I became more established with my little girl’s routine, expressing 3 hourly day and night, doing her cares, doctors rounds, tube feeds and weigh ins. Somehow, I managed to miss that she was losing weight, and a lot of it. When she got down to 3lb 6oz, they added fortifier to my milk, only confirming to me that I was failing her yet again, even my milk wasn’t good enough for her. I had no emotional connection with her, but I did do kangaroo cares (whilst double expressing, a prem Mummy triumph!). Her name was chosen on around day 3. Her middle name is Joan, after my Grandma, and her first name is Rose, after the flowers we had at her funeral. It’s a fitting tribute to the most wonderful woman I have ever known.
We came through the NICU experience relatively unscathed despite being treated for suspected sepsis and having her feeds stopped. She took her time coming out of the incubator into a cot as she couldn’t maintain her body temperature, and she had the odd brady and apnoea, but she tolerated (another NICU term) her feeds very well. No surprises there, as she loves her food now! After 17 days, we were discharged with our 3lb 15oz little bundle.
The next 6 months were pretty awful. She didn’t sleep. At all. She breastfed for an hour and a half at a time only to start again an hour and a half later. Then she stopped gaining weight and had to go onto prem formula. She stopped breathing on me (thank goodness for resus training) and it became apparent that I had no bond with my daughter. Her needs were met, but I didn’t love her. I received some wonderful support from the ladies at BLISS when i finally realised I’d missed my ‘rush of love’. Although I’ve accepted that I’ll never have ‘that’ moment, I am still insanely jealous of those who have experienced it.
I am pleased to say, that I am now totally and utterly in love with Rose! She is the most wonderful 17 month old; caring, funny, cheeky, sunny natured and finally starting to learn to walk. In terms of her development, we’re getting there. She didn’t smile until she was 17 weeks, roll until she was 9 ½ months or crawl until just before her first Birthday, but I was a very lazy child and they think she’s following the familial line. She’s been referred for ongoing reflux problems, and there’s some worry over her gross motor skills and speech, but when she’s at nursery, she just looks like any of the other toddlers her age.
At the same time as Rose decided to start crawling I got made redundant from my job in CAMHS. I was devastated as I loved my job, but the new hours which were available just wouldn’t work for me. I was then left in a difficult position: I had limited childcare (Thursday and Friday) and I was now a single Mum, so I needed a job which I could make the hours work for me, and around Rose’s needs. Thus, Ring Of Roses was born! I went to art college when I was younger and my Mum is also an artist, so it was natural for me to venture into this area of work. I had developed a technique whilst at art college, which allows me to transfer images onto different surfaces, and after some experimentation, the first of my products began to develop. The range has continued to expand and I now have a wonderful following on Facebook with steady orders flowing in. I have also been lucky enough to secure another job 2 days a week to support us whilst my business becomes more established. My ultimate aim, is to be able to donate 10% of each sale to BLISS, as a way of saying Thank you and a way to help them continue the wonderful work that they do. 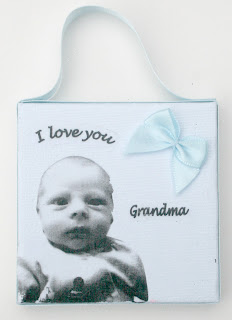 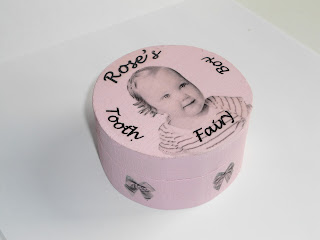 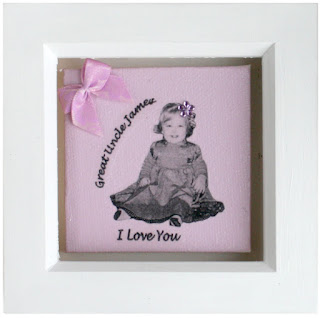