How to Break the Dummy Habit Completely

Today's post is by Joanne Mallon, author of Toddlers - An Instruction Manual, a practical and helpful guide to raising your toddler. The book is available from Amazon in paper format as well as a Kindle edition. Part of the royalties from the book got Home Start, one of the UK's leading family support charities.

Joseph never had a dummy, which is a story for another day (they are beneficial for premature babies) and I know for many parents how to approach withdrawing the dummy is a big issue. Thank you Joanne for sharing this with us. 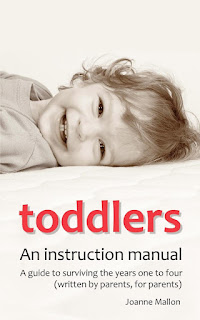 How to break the dummy habit completely:
You will make it easier on both of you if you decide to drop the dummy either when your baby is very small, so they forget about it quickly, or when they're old enough to understand that it’s time to give it up and talk about it (around 2 or 3). In between these stages is probably the hardest time, because they'll be old enough to make an attachment to their dummy, but not old enough to understand why you want to take it away.

The first thing to be aware of is that you as the parent need to be ready to give up on the dummy before you expect your child to. As parents of dummy users (and yes, both of my children had one) we do get reliant on them to soothe a fractious crier. So when you decide that it’s bye bye dum dums, make sure that you're mentally prepared to say no or find other alternatives for at least a few days. If you're already exhausted or stressed out about other issues, leave it until those things pass.

Start breaking your (and your child’s) dummy habit by stopping taking one out with you during the day and keeping it for night time sleep only.

And when you do decide to give up the dummy, noo noo, comforter or soother, here are some strategies to try:

·         Appeal to their sense of maturity
Yes, they've got one. Some children love to be 'the big boy' or 'the big girl', so appeal to them on this level. Point out that they won't want something that marks them out as a baby.
·         A visit from The Dummy Fairy
This is the Tooth Fairy's cousin, who leaves gifts for children who give her their dummies.
·         Send it to Father Christmas
Did you know that Father Christmas collects up dummies to distribute to all the babies around the world? And also leaves a special gift in return? You do now. The advantage of this technique is that the child is likely to be distracted by the excitement of Christmas
·         Old fashioned bribery
Lacking in imagination, this is what I did. But it is a classic motivational technique -- make change more attractive than staying the same. When my child spotted something she liked in a toy shop, I'd say "You can have that in exchange for your dummies". Eventually she caved in when she spotted a particularly unattractive hot water bottle cover that she wanted more than the dummies.
Posted by Kykaree at 20:14