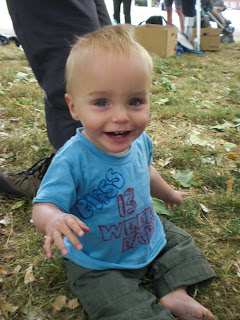 These days, for the most part, I don't really think of Joseph's time in hospital, or even that he was premature. It bubbles underneath the surface, and at times comes to mind if I need it. "Oh, Joseph seems a little small" "Joseph doesn't run like the other kids", and its there, in his defence. But, quite often it's all in a box, neatly packaged up.

In the lead up to Joseph's first birthday I played the game....."this time last year". It was horrendous but I couldn't stop it, reliving every moment, every conversation, every sight and smell. I could remember conversations like they were yesterday. And that's trauma. In times of trauma and stress your senses do that to protect you. The inability to turn that off can become post traumatic stress disorder.

At the time of Joseph's first birthday the stuff was everywhere, I don't think I even owned a box. The memories, the fear, the anger, the resentment was there for the world to see. I felt enormous guilt, friend after friend managed fat termies, why did I fail my son?  Everyone was telling me it was over, that I had a perfect little man, slowly emerging from the coccoon of prematurity and becoming a beautiful, strong boy. But I couldn't really see it for all the mess. My mind was plagued by the fact he was so far behind all the other kids I knew, and it was all my fault.


By the time Joseph's second birthday came around, the box was there, and most of the stuff was packed. There was still a bit overflowing, and the lid didn't quite fit, but things were better, and I enjoyed his birthday a lot more than his first. The fear was still there, the late walking, the concerns about his speech and development. Deep down I knew he was fine, but that didn't stop it. The guilt was still there, but not nearly as strong. I was starting to get more perspective.

This year, coming up to his third birthday, I thought I was ok, but I am finding that the lid isn't as tight as I thought, and the tape is getting a little stretched. I am a little more alert than usual, a little more worried, the nightmares are floating at the edge of my subconcious, and the flashbacks are rearing their head again. The birth and death of Luna Bliss Boon has hit me hard, that could have been us. And I am trying not to go there, because there is no good in that - the what ifs, the whys, why not us? And the guilt. Survivor guilt. No longer do I feel guilty for Joseph's prematurity. I have moved on, if I blame myself, then I am blaming any mother who got pre eclampsia, that it's their fault, and that's just stupid.

To a lesser extent its threatening again, the negative emotional build up that occured at Joseph's first and second birthday. I have better control and more mental resources to deal with it, but it's still hard.  I have to keep concious of my thoughts, and follow them, and lead them to logical thought, away from negativity, away from the past, and into our very bright future.

It will always be there, Joseph's prematurity, and that's ok. But it must, for the most part, be kept in the box, safely tucked away.