ONE - But We're Not the Same

I have been asked by the inspirational Michelle at Mummy from the Heart to lend my voice to the ONE campaign. I've seen the buzz on the social networks, but had no idea where to start. Sometimes, the problem does seem too big, what can I do?

And I feel guilty. I have the seeds of a post on survivor guilt running through my head but they haven't come out on to the screen yet. But looking at tiny children in third world countries who are on the brink of death just makes me feel such deep grief and guilt.

Why is this? I remember when Joseph was about to be born one of the doctors sat by my bed to keep me company, whilst Corey went and rang relatives and organised things for us and our new, very tiny baby. He looked at me full of compassion and said "you look so calm, you sound so positive, things are really bad you know". And I smiled. I said to him "I am lucky. I could live in Somalia, or the Sudan, or the Congo, or Burkina Faso. I could be dying with no one to help me, no surgeons, no drugs, nothing. There would be no NICU. I wouldn't have a hope of survival let alone bringing a baby home". He left in tears.

And that is the stark reality. I am here because of absolutely fantastic medical care. Joseph was never classed as failure to thrive as we had a team of doctors one step ahead of his inability to gain weight at their required rate. He went from strength to strength under their expert guidance. I had support and help too, even though at times I felt it was inadequate, compared to a lot of mothers, I had it in bucketloads. 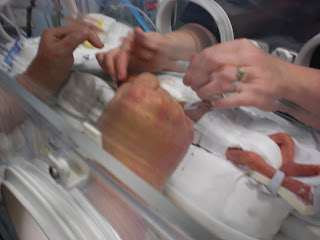 I feel guilty and sad that if I had been born in a poor country in Africa, things would have been different.

So what am I askng you to do? I am not asking you to give money. I am asking you to support an organisation called ONE. ONE are ramping up the action ahead of the G8 summit next month.

The key aims of the Thrive campaign are that by 2015 -

The problem is to big for me to make a difference, alone, but together we can have our voices heard. We can affect change.

Please read Michelle's post and look at the other ways you can help.