I have been tagged in the Our Song meme by Insomniac Mummy.

Mr Bag of Sugar and I met on the 90 bus, which is sadly no longer with us. This bus meandered its way from Stubbins to Manchester, the journey was about an hour, long enough to get to know someone! We talked for a year before we started dating, which swiftly moved to a period of engagement. We married in September 2008 and of course, I gave birth to Joseph in May 2009. I am so glad we had that long year of chatting, as things moved very swiftly on!

Neither of us are particularly sentimental. We both like similar types of music, our first gig together was Kasabian. We like it reasonably loud, quite political, soppy love songs just aren't us. There aren't even many pictures of us together! 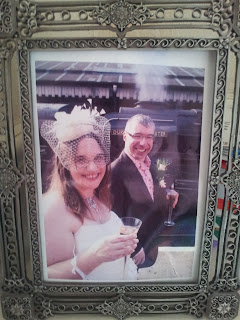 Our second gig was to Van Morrison. It was a lovely, intimate concert at the Bridgewater Hall in Manchester. Suddenly it clicked, and we decided on our first dance song, Van Morrison's Bright Side of the Road, a happy little number, not overly soppy. So I guess that is Our Song.

I am tagging the lovely Katherine from Mummy Pinkwellies , Angela from This is Life and Carie from Space for the Butterflies.
Posted by Kykaree at 08:15