The Queens Speech - A Rant 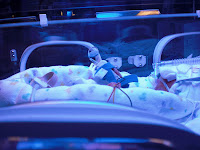 You see government minister, today marks the first full day my son spent in Neonatal Intensive Care. He was born at 27 weeks. Under the existing legislation, which I am quite sure you will not change, you have to take maternity leave as soon as your baby has been born. So I would have used 13 weeks leave before my baby was even due, leaving just 5 weeks left. When my son was 5 weeks corrected he wasn't even 7lb. He was still frail.

And minister, one in sixteen parents are in the same boat as me, and many many more have babies with medical conditions who cannot be just shoved into over priced childcare. This morning I asked my facebook friends what they thought about this change and I got dozens and dozens of responses. And yes, I understand that fathers can then take leave, though I don't even you know how much yet, but the whole hospital system with a neonate is around the mother.

And minister, what about exclusive breastfeeding for the first six months? How are we meant to do that if we are back at work?

And what, if like most babies, your baby is in and out of hospital. And minister, what about those families whose baby has an extended stay far outside 18 weeks? Fathers are, by and large, the main breadwinner as your system favours men in terms of salary. Who can afford to lose that income?

And minister, what about the hidden costs of hospital stays? Parking, meals, transport, accommodation?

I am so angry about this, minister, because through no fault of my own I had a premature baby. You would have put us even more against the wall financially than we already were. You don't put nearly enough money into preventing prematurity, into research. The NHS is so busy they can't fully monitor all pregnant women in a way that would help prevent prematurity, so before you go reducing maternity leave, minister, why don't you look at that? Why don't you see the big picture?

You say you are "family friendly", but minister, I would argue you are anything but.

This isn't the last you will hear from me