The Smallest Room in the House - Domestos Supports UNICEF

That little room at the end of the corridor, I completely take it for granted. When I need to go about my business, I go to the room, shut the door, usually accompanied by my toddler, and I when I am done, I wipe my bottom, flush the toilet, and wash my hands. Access to safe sanitation is something I very much take for granted. We grow up with it, we understand the importance of good toilet hygeine, but in the developing world, people often do not realise there is a connection between these things, good hygeine and lack of disease. 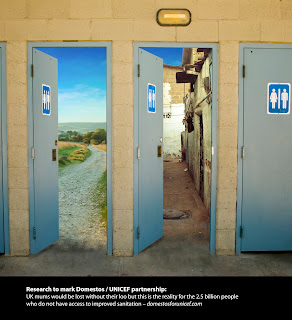 It came as a shock to me to learn that 37% of the world's population do not have access to safe toilet facilities. It's a difficult number to comprehend, 2.5 billion people are not using a toilet to defecate and urinate. These bodily wastes are outside, where children can play in them, where flies can breed and carry disease, it's a very serious problem. Therese Dooley, Senior Sanitation and Hygeine Programme Advisor for UNICEF stated recently

“The impact of sanitation is huge, as we know diarrhoea is the second leading
cause of death in children under 5 globally. About 15% of under-five mortality is
due to diarrhoea. That represents just over a million children every year. Or to
put it simply 3,000 children a day die of diarrhoea.”


We know from my earlier posts for Born Too Soon the Global Report into Preterm Birth that the rates of prematurity are very high in the developing world. Some of these births are as a result of infection. These babies are then even further at risk from infection. It's a vicious cycle.

The United Nations General Assembly has declared that safe sanitation is a basic human right. It's an outrage that so many vulnerable people are growing up in a world without these facilities.

So what's the answer? Just going into a community and building a toilet isn't sufficient. What is needed is real change in these communities. Domestos and Unilever are partnering with UNICEF to support their CATS programme Community Approaches to Total Sanitation.

CATS helps communities analyse their sanitation situation, their defecation practices and the ill-
effects of these practices. This is followed by collective action to achieve a community that is ‘open-defecation-free’. Unlike other sanitation approaches that provide subsidies in the form of cash and/or hardware to households and concentrate on latrine construction, CATS focuses on empowering communities so they take action themselves. Now in its second year, the initiative has led to improved sanitation conditions for hundreds of households in Vietnam.

So what can we do to help?

Thank you for reading and supporting this important cause.