Optimism and Craziness in the NICU

When Joseph was about to be born, I felt optimistic. The obstetric team told me we would get a good outcome, they would deliver a live baby, and although the journey would be long, there was no reason to think we would not bring him home.

I am so glad I didn't know what I know now. I think what they told me, although happily was correct, was very dangerous. But hey ho. I put my Pollyanna head on and away I went.

I had a dilemma early on. What to do about my parents? My parents live in Tasmania, I live in Bury England. My mum and dad are pensioners and are not young, my dad is considerably older than my mum. Do I ask them to come over or not?

I talked it over with mum, and I decided against it. It's a very long way, and mum had made the trek just the previous year for my wedding. Dad was in his early 80's at the time, and has a number of conditions that make flying tricky, so would have to stay home. We agreed, it was too much of an ask, so we would come over to Australia as a family when Joseph was well.

Joseph was still under 2lb and in an incubator when I started making enquiries. I found good flights, and decided on a two night stay in Dubai on the way there, and one night on the way back. I was told Joseph might be discharged on oxygen and with a feeding tube, so I thought a stop over would be good to renew giving sets, recharge batteries, and if it was all a disaster, two nights to organise emergency flights home.

I asked a few of Joseph's doctors and most of them agreed that after Christmas, when Joseph would be 7 months old should be achievable.

It seems nuts now, but when Joseph was just 17 days old I booked that trip. I was very lucky to have understanding insurers who covered Joseph as is and didn't bother about the fact he was in hospital. 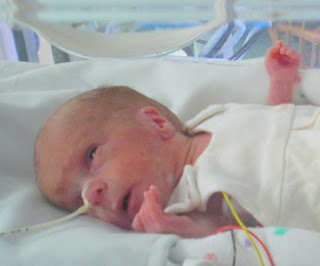 Having that trip booked kept me going. I had a kangaroo vest in 0-3 bought for his journey over. I took it in every Friday to show him how much he had to grow.

I recall one of the nurses saying to me "what if he's not fit to fly, what if the airline won't allow him to fly", and I calmly said "it will all work out, everything always does."

As each week passed Joseph got a little bigger, a little stronger, and the complications got fewer and farther between. I held out hope that we would make it on to that flight on the 6th January.

Days came and went, weeks came and went, months went by. None of the first consultant's opinons were correct. Joseph was not PEG fed, he had bottles and mush and sticks of food like any other 7 month old, and breathed the air that we do without any assistance.

That medical stop over became a very nice stop over, with a lovely hotel and a desert safari. And finally, we got "home" to mum and dad. 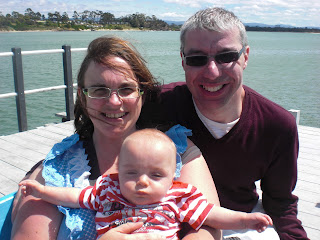 It was a funny trip. Joseph still looked like a newborn, I recall a father and his 8 year old daughter looking at me with horror as I fed him a soft roll on the plane. On the way home a very exotic woman, with limited English, stopped me at Abu Dhabi airport and said "cute baby, how old?", when I replied "oh he's now 8 months!" she looked in horror and said "he is very small, you take him to doctor when you get home" Not wanting to explain prematurity it in pidgin English I just smiled and agreed.

I am so glad I still had my innocence way back when Joseph was born. Sometimes ignorance truly is bliss.