You gotta have faith... 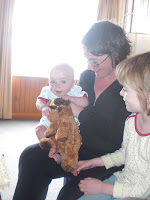 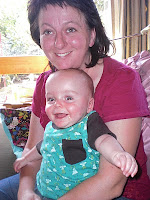 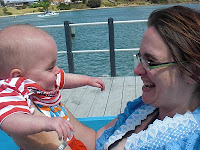 "Now faith is the substance of things hoped for, the evidence of things unseen. The very fact that we have faith, is evidence that what we hope for is real"
Hebrews 11:1

When Joseph was born, I was terrified. I didn't see him, I did hear him cry, eventually, but I felt so lost, so scared.
Soon after Joseph had been delivered, the consultant who performed my caesarean came to see me. He put his arm around my shoulders and said "I could lose my job if you chose to report me for what I am about to say...." I thought, whatever is he going to say?? "Right", he said, visibly nervous "I have delivered your child safely into the world".
"Yes", I replied, "and I am very very grateful for what you have done". He smiled and said "now look, whatever happens now is a matter for God, its out of my hands, its out of your hands, and it is up to you to pray for your baby".
I grinned from ear to ear and said "I knew it! I knew you were one of us!" (just to explain I do have a belief but its not a formal one, it is Christian in essence, and I shan't go into detail - but if you think I'm going into a great religious diatribe, bear with me) I continued "I am fully aware that it's all in God's hands now, and not only will I pray for Joseph, I'll pray for you as well".
I think the poor guy was shocked!
Anyway, every day I kept faith. I hoped, in the true nature of hope, the faith in things unseen. Although I couldn't always see it, I had hoped that one day Joseph would be at home, with us, playing with his toys.
When Joseph was still under 2lb I booked our trip to Australia for January. Joseph would be 7 months when we got on that plane at Heathrow. I looked at him, teeny in his incubator and hoped that he would be well enough. But it wasn't hope in a vague "I hope so" sense, it was a firm hope, a faith that Joseph would make it and be fine.
I believe in visualising. I would think about us in the sunshine, Joseph with my sister - his aunty Penni and his cousins, my greatest friend Susan, about showing him where I am from, and where his extended family live.
I kept that faith, and we made it! During my visualisation, I visualised a happy, calm baby who enjoyed the joy of travelling, and funnily enough, we didn't have one moment of trouble, he adored every moment.
And I have faith that our trip to Australia is just the first of many adventures.
Posted by Kykaree at 20:25