Isn't language an amazing thing? I often wondered how babies acquire and use language, and it really is remarkable to have access to this thriving, living sponge, and see what he takes in and what he uses.

A few weeks ago, we went to buy his winter coat. Now I have always, even when he was pre term, spoken to Joseph in a conversational manner, asked him questions etc. People have thought I am mad, but I don't care, nothing new there!

So I got three coats out a green, a red and a yellow. Chit chatting away, sounding annoyingly like a children's television presenter I said "which one would you like Joseph, the red, the green or the yellow?" and this little voice says "lello". I look down, and there is my little boy looking at me, very seriously. A lady behind me said "well looks like you'll be getting the yellow one!". Now this coat is rather yellow. Some people might even say its hideous. I changed the order of the coats and asked again. Joseph looked at me as if to say "for goodness sake mother you know the one I want" and said again "lellow". So we bought it.

What was funny is that up to that point Joseph said fairly standard baby words "mama" "daddy" etc. I had no idea he knew what colours were! I don't recall teaching him colours, but that's just it. Babies are sponges. They pick things up by osmosis and then apply them when they see fit.

Joseph has always been a funny, happy chap, but now there is some language he is hilarious. We have had snow the last few days, and Joseph is not a fan. We had to go out this morning to do some last minute Christmas shopping, I was putting his coat on and he said "no, no, no, no" as if to say "I am not going out in that!"

Another trick is to stand in his cot and throw things out. I can hear this wee voice saying "oops oops". I also love the word substitution. There is a popular programme here for babies called Waybuloo, they do yoga in each episode, which the call (somewhat annoyingly) "yo go". So now, Joseph says "go go" for yoghurt, because of course "yo go" means television!

The other thing that is amazing is accent. Being a stay at home mum, Joseph is with me most of the time, I have an Australian accent (think Dannii Minogue rather than Crocodile Dundee), my husband has a very thick Lancashire accent (like the nodding dog on those stupid insurance adverts).

Joseph's accent is somewhere in between. What I am hoping is that a lot more language development will occur around 20 months, we'll be in Australia, and it will gladden my heart if he speaks with an Aussie accent, even for just a couple of months! 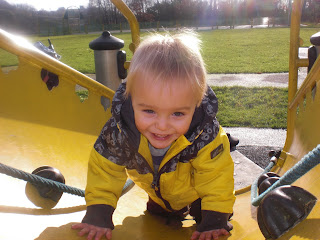