This post is in memory of all the special angels no longer with us due to NEC, but particularly Freddie, who lost his brave fight this weekend, born at 23 weeks + 6 days and on this earth for just over 3 weeks.

This post is based on my experience, it is informed somewhat by reading and what our doctors said to us, but it is to be taken merely as my thoughts, if you need more information please consult your child's medical team.

NEC is perhaps the most pernicious and evil of the complications of prematurity. It strike regardless of gestation, and it can appear at any time during the child's NICU journey. It's potentially fatal, and can cause long term problems. It can occur more than once.


NEC is the abbreviation for Necrotising Entercolitis. Necrosis means death, so we are talking about death of tissue. Enterocolitis is the inflamation of tissue in the small bowel or colon.

Precisely what NEC is and how its caused is not completely known. The signs and symptoms are not always easy to spot, but usually a distended abdomen, problems with passing faeces, sometimes the appearance of blood, and usually blood tests will show signs of infection and necrosis. It is believed that giving the baby breast milk rather than formula may assist in preventing NEC, however it can still occur in breast fed babies.

Treatment is usually the cessation of feeds into the stomach, treatment with antibiotics, release of gas in the stomach, and sometimes surgery, cutting away the affected parts of the intestine and sewing them back together, usually with a stoma, so the excrement bypasses the lower parts of the bowel.

The treatment of NEC can cause lifelong problems, Sara, a friend I met through Bliss has agree to share a photo of her little girl, Ellie now 2, which illustrates the external problems that NEC can leave. 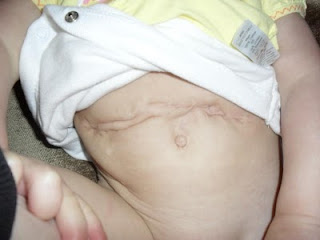 
I feel very strongly about this subject as it nearly took my daughters life, i dont think people realise how fatal it can be. Ellie got it when she was 3 weeks old and weighing 800g at the time, she had 15cm of small bowel removed and two t...hirds of her colon including her apendix. She had a stoma and the effects of NEC have not only left her with a terribly messy scar but bowel problems for life, the valve in her bowel which retains water was removed so now everything passes through her very quickly and loose. She caught NEC for a second time when she was bigger but it was treated with antibiotics.

She goes on to say,


(The) surgeon wants to try and neaten it before she starts school. She has been left with long term bowel problems, frequent loose stools and is on sodium suppliments and immodium for it. She is also going to start monthly vitamin B12 injections as the part of the bowel that absorbs B12 has been removed.

This is one of the reasons that babies are transferred in the beginning of their NICU stay. Joseph was not transferred, and when he caught NEC we were in a hospital where surgical treatment was not possible. At the time I did not understand the full implications of NEC, and did not wish to know, as all I knew at that time in that some cases, the outcome was not a positive one. The team were in a quandry - Joseph was very small and may not make the transfer, or he may not survive due to not being able to have surgery.

Joseph was treated with antibiotics and cessation of feeds, and a long line was inserted so that Joseph could be fed intravenously. We were extremely fortunate, that these methods all worked, and the NEC was arrested. Joseph is still monitored every six months by the paediatric team, and they still monitor his bowel performance (which I am happy to say is in full working order, and did not sustain long term damage)

There are times when NEC cannot be successfully treated, and ongoing research is being done in this area. Often these babies are the tiniest of babies and surgery is incredibly specialised and difficult.

I've blogged about this in the hope that if you have a friend or family member going through NICU with their baby, you may be better placed to understand what is going on. Sometimes its confusing to know that a baby needs feeding, but to hear that feeds have stopped is very confusing.

I hope that over time micro surgery improves, and the knowledge of the small bowel also improves and we see the outcomes for these poorly babies improve greatly with as well, currently there is an 80% success rate for babies with suspected or actual NEC treated with antibiotics and conservative treatment, and a 50% success rate for those who have had surgery, but as we have seen these success rates only tell half the story, we do not know how many children have long term issues as a result of NEC.

Many thanks to Sara for sharing her and her daughter's story. I wish them all the very best for the future.
Posted by Kykaree at 16:15