My good friend Kylie (and mother to Joseph's best male friend!) has agreed to share her story of coming home with her baby on oxygen. It is quite common for a premature baby to come home on oxygen, and whilst it appears daunting, it doesn't have to be a nightmare, as Kylie's story shows. 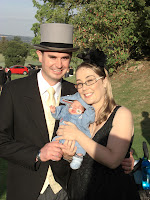 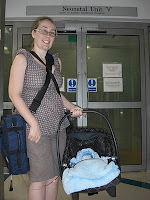 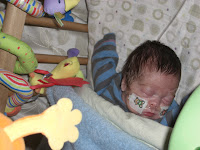 From the moment that Llewellyn graduated to SCBU from NICU, I had an inkling that he was going to be coming home on oxygen. After the move, I watched as his oxygen requirements went up and up as he struggled to breathe on his back.
To reduce the cot death risk, babies need to be slept on their backs, however, as the majority of the lungs are in a person’s back, babies with lung problems find it easier to breathe on their tummies. For this reason, they are cosseted a little while in NICU, being allowed to sleep on their tummies. Cot death isn’t as big an issue because the babies are hooked up to a large number of monitors. Once they are in SCBU though, the focus shifts to getting the baby ready to go home, and this includes getting them used to sleeping on their backs.
So, back to Llewellyn. We had been told that he may be coming home with us in three weeks. I also figured that if that were the case, it would take some kind of miracle for him to escape coming home on oxygen because of the levels that he currently needed. I immediately started worrying. We have stairs in our house – the bedrooms are upstairs and the living area downstairs. I was envisaging myself carrying my tiny baby under one arm and lugging an enormous oxygen cylinder (the ones they have in hospital) under my other arm, going up and down the stairs all day. I wasn’t looking forward to it.
I expressed my concern to one of the nurses in the hospital and she was brilliant. She reassured me that no, I wouldn’t be lugging a cylinder all over the place. We would instead have a grey box (a concentrator) the size of a dustbin installed in one of our rooms. Connected to it would be enough tubing to reach all over our house. The concentrator runs off mains power and it works to convert air into pure oxygen. The nurse then hunted down a copy of the Bliss publication, ‘Going Home on Oxygen’. I read it cover to cover and it answered a lot of my questions and reassured me a lot.
As it came closer to discharge, our nurses were very good at preparing us for dealing with home oxygen. They showed us how to change Llewellyn’s nasal cannula (the plastic tubing with prongs that is hooked up to the oxygen). As Llewellyn became more stable, they also encouraged us to take him for walks in the hospital grounds. They showed us how to disconnect him from the wall supply and to connect him into one of the hospital portable cylinders. While the hospital cylinders were different to what we would be using at home, it gave me the confidence in disconnecting him from one supply and connecting him to a portable system. It was also a fantastic experience – a chance to have my baby to myself!!!
Three days before discharge, the oxygen man came around to our house to inspect it to make sure that it was suitable for oxygen installation (apparently if you live above a fish and chip shop, it’s too dangerous to have home oxygen – at that point I was very thankful that we didn’t decide to live in the flat above the cafe that we were considering!). He then installed the oxygen equipment:
-          The concentrator and tubing
-          The extra large back up cylinder should the power supply fail
-          Three mini portable cylinders and a regulator
He showed Drew (I was at hospital with Llewellyn) how to turn on the converter, how to check the meters, how to connect it to Llewellyn and also how to use the portable cylinders for when we went out and about. He left us with a lot of information, including a list of people that we needed to inform about having oxygen in the house. These included:
-          Our insurance company
-          Our landlord so they could inform their insurance
-          The fire brigade (so you are a high priority in case of fire)
-          The electricity supply company (so you are a priority if the power goes out)
Finally, it was two days before Llewellyn’s discharge and we were rooming in at the hospital. It was a wonderful feeling- to be almost on our own with our baby. I spent most of the first day just staring at Llewellyn, sleeping in his cot. The day before discharge we ran through a checklist of everything we needed to go home:
...car seat...check
...going home outfit....check
....muslins to stuff around Llewellyn’s head in the car seat...check
...portable oxygen cylinder....no!
Cue hubby’s mad dash back home to collect the oxygen cylinder.
The next day Llewellyn was discharged mid-morning. We had specially hired a car to get him home so that Drew would have the pleasure of driving his son home from hospital. Once home, we excitedly turned on the concentrator and carefully hooked Llewellyn up to the machine. We were so pleased! That afternoon, after we had had a chance to settle in, our neonatal outreach nurse arrived to check that the oxygen was all hooked up and then we were on our own!
Going to sleep that night to the steady hum of the concentrator (picture a steady shhhhhh clunk sound) I was ecstatic. My baby was home at last!

Over the next few days we became more and more used to dealing with the home oxygen, until, it almost felt like a normal part of our routine. There are a few stories that I would like to share with you.
Firstly, as I mentioned, when at home, Llewellyn was connected by metres and metres of plastic tubing to the oxygen concentrator. What no one mentioned to us was how the tubing could become a trip hazard. Poor Llewellyn was so good and very tolerant every time that I was carrying him and accidentally trod on his tubes, yanking his head backwards!
A week after we were home, I needed to take Llewellyn back to the hospital for a follow up eye appointment. I decided to take the bus, keeping Llewellyn’s protective germ barrier (the plastic rain cover) on him at all times. What I hadn’t counted on was the young toddler in her pram beside us. She loved babies and was very frustrated that she couldn’t see mine because of his plastic bubble so instead, she decided to yank his oxygen tube! The poor nanny looking after her was horrified when I pointed this out to her.

Two weeks after Llewellyn’s discharge saw us heading off to the home office to sort out a visa for him. We were planning on heading back to Australia for a holiday in a few months and needed to get his visa sorted in time. Everything was fine, until we went through security. The guard noticed the bag under the pram and said “all bags need to go through the x-ray machine!” He immediately pulled it out and placed it on the conveyer belt. I said “No – that one’s connected to the baby! It’s got his oxygen cylinder in it!” He was mollified and pulled it back off again very quickly.
We also didn’t let the oxygen affect our plans. After Llewellyn had been home for nearly three weeks, we had a wedding to attend in the country. Drew was to be a groomsman and we really didn’t want to miss it. We rang the hotel to confirm that it would be ok to have oxygen on the premises and then, when the time came, packed up Llewellyn complete with his oxygen, spare cylinder and sats monitor. He was an angel throughout the wedding – he slept pretty much through the entire thing! 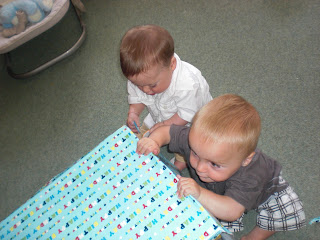 Llewellyn and Joseph - up to no good!
Posted by Kykaree at 10:00