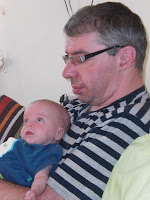 My husband is a brilliant dad. MOTH (man of the house) loves kids, although until Joseph came into our lives wasn't all that sure about how they worked. His knowledge of pregnancy and childbirth is far greater than mine, or certainly was in the early days. He knew I was pregnant before I did. He knew far more about pregnancy symptoms that I did. He did panic at times, particularly when my morning sickness was at its worse, that our child was going to come out resembling a cornflake. Which, maybe he did, at 1lb 7oz when he got jaundice, he did sort of look like a very large cornflake. But I'm sure that wasn't my fault.

When Joseph was born, I couldn't be there. Joseph was lifted out the sunroof and taken to special care. My husband saw Joseph in theatre, he went to see him in NICU as soon as he was able. He took a photo so I could see my baby. MOTH differed from me. I saw a baby who was poorly, with potential complications, who might have long term disabilities. MOTH saw things coompletely differently to me. He called Joseph either Magic Boy, or Action Man, he only ever saw him as being a bit small. He refused to listen to anything the doctors said, or indeed I said, to him, his little boy was perfect and would be fine.

In the early days, I would visit Joseph in hospital in the morning, and Corey would go in the evening. He knew a lot of the nurses personally, as his mother had trained to be a neo natal midwife in that unit a long time ago. Often Corey would get what I called "free cuddles" a nurse would be on who knew him well and would sneak Joseph out for a snuggle!

At times my husband's attitude infuriated me.  It made me so angry that all he could see was a perfect but very small baby, and he couldn't support me in discussions with doctors and nurses, and has never been with me to follow up appointments. I remember one day being so upset as Joseph had had to have screening for ROP (retinopathy of prematurity) and my husband said on the phone "I don't want to know, none of them are any good those doctors, they're looking at bones, looking at bones, Joseph is fine". I slammed the phone down, or would have done. With all these fancy phones why hasn't someone invented the "slam" button.

But looking at it now, MOTH was the perfect balance to me. Yes, I was always positive, but I was realistic, but having someone who was, in effect, Joseph's cheerleader and believed in him 100%, was wonderful.

Joseph has always adored his dad. He sits by the window watching him leave in the morning, and sits by the window waiting for him to come back at night. All day I get "daddy gone" and "daddy soon". And its MOTH who perhaps understands Joseph best. MOTH lets me get on with my parenting, however at time he seems to instinctively know what to do. For example, he seemed to know when Joseph was ready for stories to be introduced into his routine, he's known when to go to the doctor if I've been in a flap, and he knows when to just leave me to it.

Parenthood is still a journey for us, and like all parents we don't always get it right. We're often tired, and sometimes too busy to sit and talk and plan things out.

This weekend I went to London for Cybermummy and Joseph spent two days and nights with his dad. They had a ball, steam trains, parties, a lot of bad food. Joseph is completely exhausted.

And hasn't asked for his daddy once!  I think they tired each other out!
Posted by Kykaree at 12:25