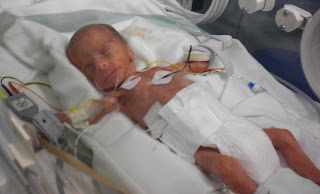 Lately I have been taking part in some research projects. There have been two main ones, first a DVD for mothers and fathers who have a baby in a Neonatal Unit (NICU), and secondly a booklet for Tommy's about premature birth.

Part of the second project involved telling our story to a professional writer. And you know, I think its the first time I have cohesively told the story from beginning to continuous end to someone in a completely impartial role. And you know what, it sort of hurt.

When Joseph was in hospital and I was so stressed, caught up in it all, and wondering if it would ever end, people would say "one day, you will forget all about this time". And I used to hate it. How could I ever forget? The fear, the loneliness, the isolation, the anger, the grief. But you know, yesterday brought it all flooding back, and yes, I had forgotten.

I was never one for keeping keepsakes. Other mums left hospital with lots of different things from their baby's journey. I left with virtually nothing. I didn't even keep one of the incredibly small nappies. Last week, when at the consultant, I asked for one, so I could keep it, and take a picture. 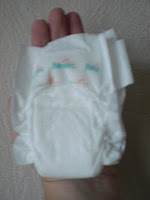 I really had forgotten just how small Joseph was at birth. I was asked yesterday to recount our journey through NICU. I had forgotten the fear, the reality of being sat down by a consultant and being told that my baby might not live through the night. I really had forgotten about the nitty gritty of life in the unit. I recalled how I used to catch four buses if I went twice, and six buses if I had a break for lunch in town, and eight buses if I went twice a day. I forgot about the madness of organising the redecoration of our flat whilst Joseph was critically ill. I forgot about how we hated being in the flat at night as there was a great gaping hole in our lives. Our baby was not with us.

When I support other mums and dads I always say the same thing, that that time in hospital is so surreal, you have a baby but you don't have a baby. The crib is empty, you may have bought your pram but you can't use it. I remember how weird it was to have our car seat fitted and we drove around for a couple of weeks with a car seat, but nothing to put in it. I wanted a big teddy bear or something so it didn't look so empty.

And today, both my husband and my mother have said the same thing "look at what you have now, everything is fine, you have a happy toddler". But my feelings today aren't about the present, and yes I know how lucky I am. I know and am painfully aware that not everyone takes their babies home. 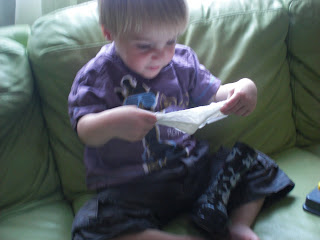 But despite the PTSD and the months of feeling awful, I don't think I have grieved. I did grieve for my lost pregnancy, but I don't think I ever grieved for the loss of that normal newborn experience. I think though, the relationship I have with Joseph is different because of what we went through in those early months, and that's just fine by me, because I think he's amazing. (That's him looking at the "silly nappy" as he called it!)

Don't forget the give away for a Disco Pig
Posted by Kykaree at 10:14