Once Upon a Wartime - Imperial War Museum North

I have loved the Imperial War Museum since it first opened in Manchester in July 2002, coincidentally, the same year I arrived in Manchester. Now I know a war museum may not be the first place in mind when you think about a day out with young children. I have just returned from a lovely couple of hours with Joseph, and would urge you to go and visit!

The Museum is situated in Salford Quays, further coincidence, where I used to work. It's an absolutely stunning building, and inside is spacious with plenty of room for little legs to run around. The current exhibit, running from the 11th February to the 2nd September is Once Upon a Wartime. 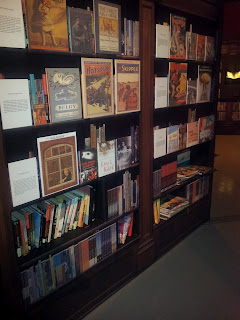 The exhibit tells the story behind 5 powerful children's novels - Warhorse by Michael Morpugo, Carrie's War by Nina Bawden, The Machine Gunners by Robert Westall, The Silber Sword by Ian Serallier and the Little Soldier by Bernard Ashley. The exhibits are very interactive. Joseph's favourite was the Welsh kitchen recreated from Carrie's War, complete with little cakes and a tea set. What I really loved about the exhibit is that it caters for every age group. If I had say a child Joseph's age and an 8 year old, I could have occupied them both happily for a couple of hours. There is a "trail pack" with activities to get older children thinking about what they are viewing and looking at issues like loyalty, separation and identity. I found the stories incredibly moving. I read Carrie's War over and over as a child, and am working through Michael Morpugo's books. I am looking forward to reading Little Soldier, which is more a contemporary story of war.

The museum is very careful, in all its exhibits, to tell the human story behind war. It is very much a place of education, and of peace, not war, making sure that we all grow to understand the impact of war, on everyone, from the oldest to the very youngest. 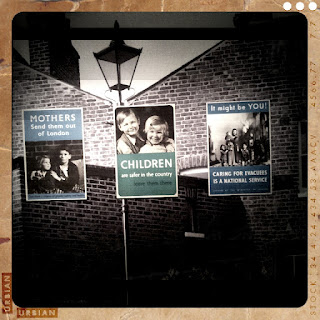 I found it interesting today, particularly viewing the Carrie's War exhibit, that when I read this story as a child, I thought very much of Carrie's perspective, being sent away from her mum, but discovering this new world in Wales, that in many ways was much nicer, and more suitable for a child than the London she left. But today, for the first time I thought of the mother's perspective, and it broke my heart. How must it have been, to know you needed to send your child away to safety, but not knowing if you might never see them again? I couldn't imagine putting Joseph on a train, sending him to people I had never met, with war raging. It's unthinkable.

During half term the museum has a children's area with craft activities, story telling and a play area open every day from 11 - 4, which is suitable for very young children upwards.

I would urge you to go and visit this great museum and admission is free.
Posted by Kykaree at 13:04