The Things That Scar 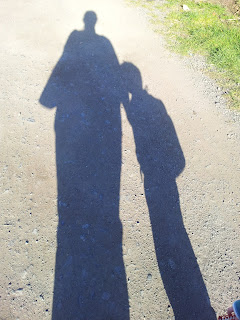 It still hasn't left me, that time in the neonatal unit. It's nearly 3 years on now, and it's interesting how much that time has impacted on me personally.

Occasionally, not all the time, I still see Joseph as that vulnerable little baby, and a wave of fear washes over me. Last night Joseph was very upset going to bed, because I've been on nights and he is waking up and I'm not there, when I am there he wants me with him all the time, especially at night. He finally settled. When I went to bed at 10 I had a panic as I couldn't hear him breathe so had to go check. Although he's a big boy now, it still hasn't left me, those little worries. It pains me that maybe he felt abandoned when he was tiny. I wasn't there for him all the time.

Now the weather is nicer Joseph is starting to wear cropped pants and t-shirts. I still worry about the scars. They are not major ones, just from iv lines, but they are quite raised and noticeable. Sometimes people ask me if he's been bitten by insects. I never really know what to say. Whether to say "I don't know", to explain, to just shrug it off. I don't want him to be hung up by them. Strangely enough the one I was worried about, from his hernia surgery, has been so well done that its invisible!

On one of my blogger forums this week there has been a discussion about whether we would allow non-formal milk sharing, or allow our baby to nurse on someone else. Quite rightly, most of the mothers have said no, nursing is too intimate. That caught me, that I lost all that intimate new born time because of Joseph's prematurity, and I'll never have that. I had to share him with nurses and doctors. To me that leap to have allowed him to nurse from someone else seems a very short one.

That old sadness is haunting me again. Close friends have had babies recently, and it hurts, all over again. Of course I share their joy, and I wouldn't want what happened to us to happen to anyone else. I wouldn't want my dear friends to have a premature baby just so I would have more in common with them.

However its my old grief, and more than that, that I wanted better for Joseph, a better start, with me and with his dad nearby all the time, safe in the closeness and intimacy of our family.

No wonder I still get separation anxiety when I leave him. It brings it all back. I find it hard to enjoy time away from him.

Sometimes I wonder if it would be helpful to have another baby, whether it would help erase some of that stuff and replace it with something new. But then what if it happened again?

Lately a lot of people have asked me when we are having another and are shocked when I say no more babies. I don't think people realise just how scary it is having a premature baby, and just how much it hurts to see what happens to them. They aren't just put into a baby nursery and left to grow, there's so much active medical treatment, and so much risk to the baby of complications, of things going wrong.

And its good, that I still remember, that I can still feel the hurt and the pain and the fear.

And I still feel very much the joy, of having a baby, of watching him grow, of developing a bond. What happened to us happens to so many families around the world, the way we care for these families, support the mothers, the fathers, the siblings and the babies needs to improve.

At times I feel lost, neglected, that I need a blog to read or a hand to hold.

It still hasn't left me.