This week is Diabetes Awareness Week. In this post I want to do two things. Firstly I want to share with you a very powerful video. I want every parent to be able to spot the symptoms of Type 1 Diabetes. It is important. I first learnt about diabetes at the age of 7. I was on holiday with my parents on Cape Barren Island and we were watching the ABC in the afternoon, when it was cold and rainy outside, and they showed a documentary about children living with diabetes. It really shocked me, how these children had to live and it made me sad for them. I had asthma, and I knew how debilitating that could be, but this just was a whole different level. Diabetes doesn't have to be a sad story, but its important to be Type 1 Aware.

Secondly I wanted to share with you a story about a young child living with diabetes and I am thrilled that a good friend of mine, Joanne has agreed to share her son's amazing story. Please watch the video first.

Friday 9th July 2010- a date that I will never forget. My son Ben was 2, it was a hot summer and I had noticed that he was drinking a lot of water, even out of the bath taps. He was also weeing continuously. I
had a 2 month old baby, my husband had been abroad for 5 weeks of military training and I was
exhausted and didn’t realise what was happening to Ben. He had lost weight, he was looking very
pale, he was vomiting and was exhausted. 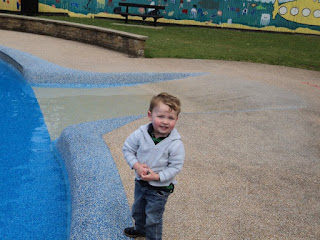 I took him to the GP on that Friday morning knowing that he had all the symptoms of Type 1
diabetes. I was fully expecting the GP to say that he was fine. Ben has his first finger prick glucose
blood test at the GP- the result was Hi- too high for the meter to process. We went straight to A and
E resus .

The rest of that day was the stuff of nightmares. I had to hold my little boy down whilst they did
repeated blood tests and gave him injections. He cried, screamed and kicked and my heart broke.
His blood sugars were over 30 (normal is 4-7), he had ketones and the acid in his blood was rapidly
increasing and that would have been fatal.

Ben spent the weekend in hospital and we all started on a journey of rapidly learning about Type 1
diabetes, insulin and injections. We had to learn how to treat him when his blood sugar drops too
low (hypos) which can lead to fits, coma and death if left untreated. Within a few days Ben quickly
got used to having the injections- at least 5 a day.

I had advice from a lovely doctor- to allow myself to grieve for the loss of the healthy normal life my
son had. I cried most days for that first year- I used to look at my peacefully sleeping son and know
that his life had changed forever, his little fingers savaged by constant blood tests, his skin sore with
the injections. Danger was forever round the corner. 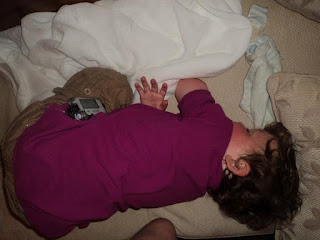 As Ben was so little it was so hard to get good control of his blood sugars. The insulin came in doses
of ½ unit increments and we needed much smaller doses to be able to control things well.

13th December 2010 is a date I remember for much happier reasons. It was the day that Ben started
pumping insulin. A pump works in a much more similar way to the body’s pancreas. It gives Ben a
background dose of insulin 24 hours of the day and then it gives him a larger dose when he eats. The
benefits to Ben are just amazing- his blood sugars improved dramatically and he no longer looks grey
and ill. He has one needle every 3 days when we swap the cannula of the pump instead of 5 a day. 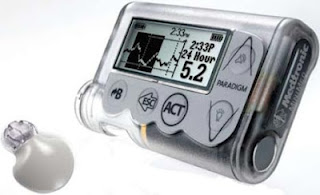 But it is not the total answer. Ben still has to have multiple blood tests every day- up to 20 a day.
He has lots of hypos and every night we set our alarm clocks so we can check his blood sugars
throughout the night. Every night there is a real risk that Ben will a hypo that will lead to fits, coma
and death. We have on many times found his blood sugars to be dangerously low and on one
occasion he was so low he was scarcely conscious and could only just swallow the sugar he needed
to save his life.

Everything he eats needs to be weighed and the carbohydrates measured. The weather, activity and
illness all have a dramatic effect on his blood sugar levels. He can’t go round to friends’ houses to
play as other Mums don’t know how to look after him, he can’t go to holiday camps or anywhere
without an adult who has been trained to look after him. Diabetes turns simple illnesses into
medical emergencies. A vomiting bug last year caused him to end up in the High Dependency Unit in
hospital. 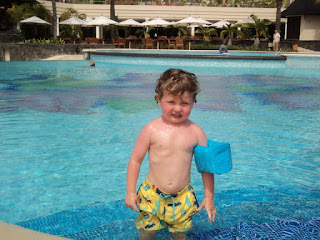 There is no break from diabetes, no holiday, no respite, everyday is a relentless cycle of checks,
blood tests, insulin and weighing food. It’s always on my mind, there is not escape. I drop him off
to school in the morning and just hope he’s going to be safe. I’ve held him as he cries and says he
doesn’t want diabetes anymore and wants to be like the other boys at school. He asks why the
doctors can’t cure it now Mummy.

Along our journey we have been blessed with meeting other families with Type 1 children through
the fabulous organisation Children with Diabetes and the support that we have been given by other
people who truly understand what we go though everyday has been immeasurable. We are also very
proud supporters of the charity Juvenile Diabetes Research Foundation that works tirelessly to find a
cure for Type 1 and for better treatments until that time. Hope is in a cure.


Thank you Joanne for sharing Ben's story. Hope IS in a cure. If you would like to help in a practical way you can donate or fundraise for JDRF or Diabetes UK. Follow the links provided.
Posted by Kykaree at 07:30