In The News - Mental Health and Premature Birth

I was alarmed this week to read in The Telegraph an article titled "Premature babies more likely to suffer mental disorders as adults." How to terrify a parent in one easy step. Concerned, I read further, and have look at some other source articles as well. 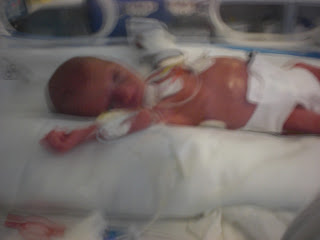 About this research: The babies studied were born between 1973 and 1985 and experienced their first episode of mental illness by 2002. The study looked at every person admitted into a mental health facility and then investigated the circumstances of their birth. The mental illnesses identified were severe depression, schizophrenia, psychosis and bipolar disorder.

What were the findings: The research found the risk was greater for babies born before 32 weeks of pregnancy. They found that these very premature babies had twice the normal chance of schizophrenia than term babies. One of the researcher Dr Nosarti states:

‘The strongest association we found in this study was to mental health disorders known to have a strong biological basis, such as bipolar disorder, further adding to the theory that neurodevelopmental differences in those born prematurely may play an important role for later mental health.’ http://www.kcl.ac.uk/iop/news/records/2012/June/Premature-birth-linked-to-increased-risk-of-mental-health-problems.aspx

Are there any recommendations: Personally the Telegraph article, and others in a similar vein including on the BBC website really annoyed me because it didn't report the recommendations arising out of the research. Dr Nosarti goes on to say that very premature babies should be monitored carefully and offered additional support and intervention as appropriate. We know that the outcomes for serious mental illness are much better if its picked up and treated proactively, and in the community if at all possible.

What I think: I think first of all we need to bear in mind that a lot has changed in early intervention, and pregnancy care since the last of these babies was born in 1985. We often think of corticosteroid therapy as essential for lung development, but improved lung and respiratory care means better brain development. Also back in the 1970s and early 1980s neonatal care was vastly different than what we have now. Parents often did not have the opportunity to interact with their tiny babies, some weren't even allowed on to units at all,  now we have kangaroo care, developmental care, and parents and babies are encouraged to bond very early. I know Dr Nosarti is concentrating on biological factors, but I do think sound developmental care of neonates makes a difference to brain development, from what I have witnessed and read. I'd love to see this research repeated in 20 years.

I was reassured by the BBC quoting Andy Cole from Bliss, who says

some of the people in the study were born "40 years ago and that neonatal clinical practice to limit neurological damage has been transformed over the past four decades, with significantly improved outcomes seen today."


I think, like many of the other studies, this information is useful for professionals, and if its used to be proactive in ensuring our premature babies get excellence in care well into adulthood, then that can only be a good thing. It also needs to be taken into account by professionals that prematurity can have lifelone effects, and should not be discounted as a factor, throughout the life of that child. However scaremongering, and making already worried parents more fearful than they already are, is a bad thing, and I do think this could have been much better reported by the UK press.