I am reposting this about Skye, my friend Ruth's daughter born at 27 weeks gestation just a couple of weeks before Joseph. She has spastic diplegic cerebral palsy. Skye has recently had a consultation and her team feel that she would benefit from a surgery called Selective Dorsal Rhizotomy. Skye's mum Ruth will do a more in depth post about this at a later stage. In summary SDR is performed regularly in the States where it is accepted as a treatment for this type of cerebral palsy. NICE, the body that assesses and approves procedures, has stated that there is insufficient evidence to approve this surgery. This means that parents need to self fund this procedure.

Skye's family need to raise £40 000 for this surgery. I would be so happy if readers of my blog could help to make a dent in this figure. I also hope to do some fundraising events too. If you are in the position to help please do so here.

Thank you so much for reading. I have met Skye a couple of times, and she truly is a gem of a child, and extremely bright, and I know she would benefit so much from this surgery. 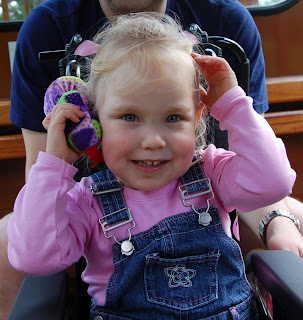 Everything progressed normally with my pregnancy as 2009 began.  I was excited, but refused to get too emotionally attached to the baby growing inside me until I reached 24 weeks – viability in my eyes.   Also, I didn’t like to decorate, etc ‘just in case’.  There was absolutely no reason to think that the pregnancy would be anything other than perfectly routine and unexciting, but still the magic 24 weeks seemed to take forever to arrive.  After 24 weeks we began to prepare the house for the baby – beginning with our room as that would be where baby would spend the first few months.

During the Easter holiday I mucked in with preparing the bedroom for the plasterer - I scraped wallpaper off the walls.  As the first week went on I began to get some pains at night.  It was waves of discomfort, not unlike period pains.  It would ease off overnight, so I chose to ignore it and assume it was just pains as my body adapted to its extra passenger.  I did begin to do less DIY though!  We went away with friends over the Easter weekend.  Whenever I did too much walking the pains would increase, but by morning they’d ease off.  I phoned the delivery suite at the hospital once we were home, expecting to be told it was perfectly normal, and instead they told me to come in.  I went in and they monitored me for a while before telling me that I’d simply done too much DIY and I should go home and take it easy.

On Monday 20th April 2009 I went into work.  Throughout the day I was having waves of pain so severe I could barely stand straight.  I kept reassuring my colleagues that it was simply that I’d done too much over the holiday, that I would be fine in a while.  That night they became even more painful and I experienced a small amount of blood loss, so I called the hospital again.  Back in we went!  They monitored me again and told me it all seemed fine but that the consultant would take a look.

The next day the consultant came to tell me I had an infection and would have to deliver the baby the following day.  However, he also added that there were no special care cots available, and that the nurses would have to phone the hospitals around to find one which had space and facilities to cope with such a small baby.  4 hours later, I was told I was transferring 75 miles to the closest hospital they could find with space!
I was transferred by ambulance and once there they told me they wouldn’t keep giving me the drugs to stop labour.  Apparently it wasn’t the way things were done in this PCT!  The next day passed in a haze of monitoring, at the end of which they told me I didn’t have an infection, I didn’t need to deliver the baby and so they were going to send me home the following day – after a more detailed scan of the baby as it was measuring small for my dates.

That evening, the familiar aches started again.  By midnight they were really ramping up and there was more blood loss.  I called for the midwife who told me that I was fine – I wasn’t having contractions at all and not to be silly.  When she realised how regular they were she decided to call a doctor to do an internal exam to check all was fine.  I was 3cm dilated so we headed down to delivery!

By the time they had found a heartbeat, I was fully dilated and ready to deliver.  I was told to push with the next contraction, so I did.  I remember the midwife saying ‘Slow down!’ and thinking ‘How am I supposed to do THAT?!’ before the midwife caught the baby!  I was thinking ‘It’s pink!  It’s screaming!’  I hadn’t expected either of those things.  As the baby was put inside a plastic bag to retain warmth and moisture all I could see was arms and legs pushing against the bag, and I thought ‘Feisty – a good sign!’ 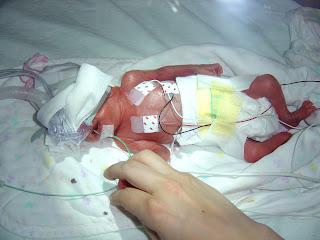 The midwife suddenly thought to ask whether baby was a boy or a girl and we were amazed to hear it was a girl – we’d assumed it would be a boy!  By the time we had agreed on her name – Skye Elizabeth – she had been ventilated, packaged in a plastic bag and incubator and was on her way upstairs to the SCBU ward.
I was able to stay in the hospital for a week, at which point they had to discharge me.  Luckily, due to our circumstances, my husband was also permitted to stay in my room for the week.  After that we were left to find ourselves hotel accommodation.  We spent each day at her side, updating friends and family daily through a photo website.

We had been warned that there would be good days and bad days.  The first bad day was on Day 4 when we were told she had an infection and needed a blood test to check her out and she might need a blood transfusion (luckily antibiotics worked quickly and she needed nothing else).  After this, however, we only seemed to have good days – the doctors were all really pleased with her, and she was doing very well.  This in itself made me feel guilty – I could see friends we had made in Special Care going through tough times with their babies, while we were having an ‘easy ride’.  All we wanted was to have her closer to home!
3 weeks after her birth, we received the news that she was being transferred back.  We had to learn the routines and rules of the new unit, but we were so pleased to be home.  Exactly one week later she was transferred again – from the higher level care at the larger hospital to the local SCBU ward.  I remember the feeling of shock I received when a baby went home from this room – it was a room babies went home from – soon it would be our turn!

We spent 5 weeks in that ward.  They felt like forever.  We gave her her first bath, we tackled breastfeeding, she moved from incubator to hot cot and then to a normal cot.  We even tried ‘rooming in’ to prove she was ready to go home.  What a disaster!  We stayed in a room on the ward, and had Skye in with us.  She didn’t sleep, wouldn’t feed and simply screamed the whole time.  At 4am I took her to the nursery in desperation and sobbed as one of the nurses cup fed her for me and suggested I go back to the room to get some sleep.  I felt useless – I was her mother but I couldn’t feed her or look after her. 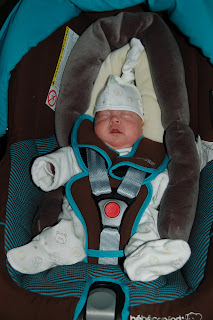 Throughout the next week, however, her breastfeeding improved and we began to think that we might be going home soon.  A few days later, I went into the unit and was told she couldn’t go home until she’d done 24-48 hours without her feeding tube in, that she refused to cup feed anymore because she wanted to suck and that I should agree to let her have a bottle overnight otherwise she wouldn’t feed.  I was reluctant but was about to agree because it was the only way I could see of getting her home.

Another nurse came along and asked me if I wanted to take her home.  When I said yes, she persuaded the doctor on the round that Skye was ready to go home, that she would feed fine once we were home, and that he should discharge her.