Back to School with Nordic Naturals

Some of you may know that Joseph has become the world's fussiest eater. That's possibly an exaggeration, as I am sure, somewhere, there must be someone worse than him. He is picky and his diet has become quite restrictive. He will fruit, cheese and bread and anything else is rather hit and miss. We've been advised to supplement his diet with vitamins. 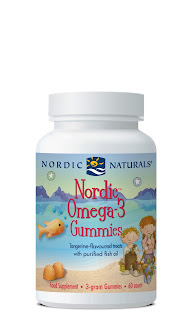 One thing that really worries me is his fish intake. Joseph used to adore fish. When he was weaning, up until he was about 20 months, he would eat all sorts of fish, and especially loved salmon and tuna. Now he won't even let it in his mouth. Unless its a fish finger. And he won't touch the salmon fish fingers. It's really frustrating. Essential fatty acids can only come from the diet, our bodies can't manufacture them. The best sources are anchovies, sardines and cod. I have no chance of Joseph eating sardines on toast!

I know loads of parents are in the same boat as me, knowing exactly what sort of food their children need to be healthy, to do well at school and to grow into healthy grown ups, but carrying this mission out is very difficult.

I am aware of the importance of Omega 3, as its proven to help in boosting the immune system and in brain development.

Recently I was sent some Nordic Omega 3 Gummies distributed by Vital Life International. At first I was a bit sceptical. Joseph's formula was fortified with fish oil, as there is lots of evidence that Omega 3 is important for brain development, especially in premature babies. The fish oil did leave a bit of a weird taste and the formula was an odd texture.

I needn't have worried. The gummies were immediately accepted by Joseph! They are orange flavoured, not overly sweet, and certainly don't taste fishy at all. Joseph now lines up in the morning for his "little oranges". I find the gummies (his multivitamin is a gummy too) is much easier than the drops. Joseph had been on vitamin drops for a long time, but they truly are revolting and now he's older he just refuses them. I've tried disguising them in juice and smoothies, but this is much easier.

My own thoughts on vitamin supplementation is that if kids have a great balanced diet and eat a variety of foods, then that's fabulous and maybe you don't need to supplement. But if you have a picky fussy child the Nordic Omega 3 Gummies are great.

The gummies are available from Vital Life, the ones we tried were the Tangerine gummies.