From Tiny, to Trying

Not long after I started blogging, I discoverd Christina - Mummy Beadzoid on Britmums. I was so excited that there was another "premmie mum" blogger on the block! I really love this post, and I am struggling with Joseph's "threenager" phase too, and that little voice in my head that says "oh but he's your tiny miracle baby".

I love my daughter, she has real spirit. A real feistiness that makes one mock-sigh, and say, “ooh, she’s such a diva!”  And then I chuckle to myself happy in the knowledge that she is going to be an independent woman, one not to be trifled with.  She fought to come into the world at 27 weeks, and she fought to come home two weeks ahead of ‘due date’ schedule.  Always in a hurry, always determined.  And everyone who knows her, especially her doting, though equally spirited mother, loves that about her.

Well, until recently.  See, I think we got off pretty lightly with the so-called terrible two’s.  Yes, she became a little more cantankerous than she had previously been – or more accurately, better at communicating any displeasure; but on the whole she has remained the same lovely little girl that she has always been – full of smiles and hugs and kindness.  I have loved the age of two, lots of fun and a sense of wonder at how our little lady’s personality develops more with each passing day.  Give me a terrible two over a baby any day.

But now, well, we’re on the verge of three.  The ‘trying threes’.  I had never heard this term before a friend used it in my presence, probably to describe the new level of challenging her daughter had become.  I’ll be honest, I thought, ‘well, that’s your daughter.  And lovely though your daughter is, my daughter will never have such tantrums or answer me back in such a cheeky way’. Ha!

Approximately two weeks ago my daughter became the devil.  Don’t get me wrong, for the most part she is still the same lovely little girl who comes and demands a cuddle before planting a big snotty kiss on me (yum), but ohhhh the answering back, ohhhh the defiance.  Where did this little monster come from and can we please go back to a previous restore point and forget the last two weeks ever happened?  Please?

Disciplining a child is not a difficult task for me.  I’m a teacher of ‘big ones’ and I am more than happy to let them know of my displeasure in the strongest possible terms.  Indeed I once had a year 9 form group so terrified of me that their teachers used me as leverage to get them to behave in their lessons.  And this was when I was an NQT in charge of a form that had been notorious in their unmanageability.  I am good with the iron rod – and without shouting, I don’t need to.  So yes, I too little lady am not to be trifled with.  Except…. Except…. 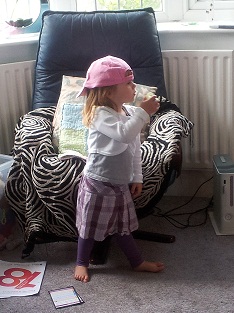 Well, you were born really early weren’t you?  You were a tiny little birdlike creature and we didn’t know if you would live or die.  You did your bit; you fought, and it became apparent that you would thrive.  But the protective feelings remained and I swore I would do my very best for you.  I swore I would be your parent and your friend (though not in that tragic “I’m a cool mum!” kind of way) and I could never imagine thinking bad things about you.  I certainly would never shout at you.

But then… then you started engaging me in tugs of wars when I needed to take something from you that youreally shouldn’t have. Then you started shouting “No!” and “Stop talking!” not only at us, but also your grandparents.  And refusing to do things, like walk past the magazines in Tesco; or let me fasten the car seat “No, Mummy! Don’t WANT it!” you would hiss.  And you threw the mother of all tantrums all the way up the motorway when mummy was already stressed, simply because I took a plastic whistle off you, because mummy really can’t have the alarming shrill racket while she’s driving.  You threw a million and one other tantrums in the space of two or three weeks that you never would have done, but a month ago.  You have really tried my patience. 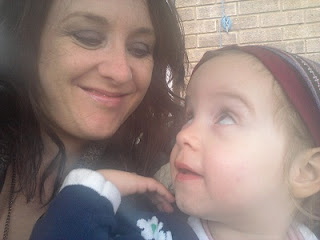 And so on occasion I have lost my rag.  I have shouted.  I never shout (well, not much) But I did. I shouted. At you. Then I felt so so guilty. Because…. you were so tiny.  You might not be here.  You might have suffered disabilities as a result of your prematurity. What if those brain bleeds had not corrected themselves?  What if the heart valve they thought might not close actually hadn’t?  What if the RSV had claimed your 3 day old little life before I got the chance to know you properly?  What if?

But none of those things came to pass.  You are well, and I am one of the luckiest mums alive.  And there is not a day goes by where I am not thankful for it.  So the biggest challenge for this mum of an almost three year old ex-prem is being the parent who must be strong and raise her child as I would have done any other; to have manners, be respectful, non-brat-like, and not be tempted to excuse unacceptable behaviour because, well, you were born so tiny. 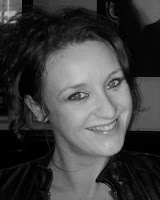 Beadzoid
Christina is a secondary/sixth-form teacher and mum to an ex-27 weeker.  She blogs as Beadzoid, campaigns for Bliss, the premature baby charity and is a committee member of the Grace Research Fund, a local Warwickshire based charity which specialises in commissioning research in perinatal and neonatal issues.